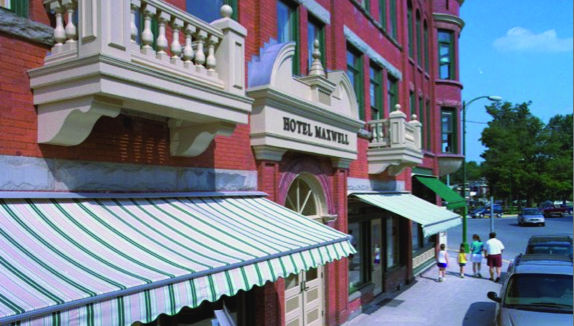 The Hamilton Initiative works to  foster and maintain businesses in the Village of Hamilton.

Formed in 2000, the Hamilton Initiative has continually sought to revitalize downtown Hamilton. Over the past 15 years, the Initiative has purchased and renovated nine properties that are currently leased to various tenants serving members of both the Hamilton population and the Colgate community.

“It was formed as a result of the community looking sort of run-down. It was tired and it was really becoming a detriment to recruiting not only the kind of quality students that Colgate wanted to recruit, but also faculty and staff.  We would bring in faculty and staff and even parents of students, and I think it was hard for them to see themselves living here, given the condition of the community at that time,” Mantaro said.

As the Initiative is a for-profit organization, Mantaro was careful to point out that its properties remain on the tax rolls.

organizations with Colgate being the sole member of each.”

When renovating the downtown properties, members of the Hamilton Initiative sought to preserve the historical character of downtown. The architects made it a priority to look at old photographs to inspire the new designs and to keep with the historic nature of the buildings.

Though the Hamilton Initiative is an LLC owned and operated by Colgate University, Mantaro believes that it also benefits community members.

“When you have renovations to this degree, it’s kind of like a ripple effect; it causes, you know, sustainable prosperity for the village. It sort of brings the level up. I think that property values of homes have benefitted from this revitalized core downtown. I think other businesses certainly have benefitted just because it’s increased traffic and visibility as well. That’s not to say we never have challenges,” Mantaro said.

In 2002, the Hamilton Initiative moved the Colgate Bookstore into its current downtown property. This has since led to increased competition with local merchants, though the Initiative seeks to limit that competition.

“The bookstore tries hard not to compete with the lines of other merchants, and that can be challenging. That’s a real juggling act. But I think that the good thing is that we’re open to discussion and feedback from the other merchants, and even from the community members as well. With the Initiative, we’re involved with the Hamilton Business Alliance, where we’re able to interact with other merchants and other business owners in the area and be there for the dialogue that happens,” Mantaro said.

Also formed in 2000, the Hamilton Business Association (HBA) currently has 120 members and is a membership-driven organization. President of the HBA Reg Wilson discussed the organization’s goals, as well as the Initiative’s role as an HBA member.

“We’re … working to increase the cooperation among local businesses in the greater Hamilton area. Hamilton Initiative and [its] purchase and management of real estate in the village elevates community pride and certainly contributes to small business sustainability,” Wilson said.

Currently, the Hamilton Initiative is no longer seeking to purchase any more downtown property.

“Our initial focus, of course, was purchase and renovation. At this point, we are not looking to do any more purchasing, and in fact, we have divested ourselves of a couple of operations, namely the Barge and the Palace Theater, but we’ve found some really good partners who have the same value system that we have,” Mantaro said.

These partners include Saxbys Coffee, which owns and operates Saxbys at the Barge, a café created in 1996 under the name The Barge Canal Coffee Company. Mantaro described the Initiative’s decision to turn over operations at the Barge.

“With the Barge, we were put in touch with Saxbys, and we had several meetings with the CEO of Saxbys and just realized that he really is in line with our thinking about the Barge being, what they call, ‘the living room of Hamilton,’” Mantaro said. “He understood that, and we really felt comfortable getting out of the coffee business and letting the experts run that.”

The other partner Mantaro referred to was Arts at the Palace, which currently leases the Palace Theater. After having difficulty finding a sustainable model for continuing a performing arts center downtown, the Initiative turned to the community to find a group interested in either purchasing or running the Palace Theater.

“Through that, this kind of grassroots non-profit organization formed, Arts at the Palace, and we lease to them for a dollar a month, because we really feel it improves the quality of life here in Hamilton. We’re very supportive of this organization and we hope that it is successful,” Mantaro said.

Mantaro also detailed the approach taken by the Hamilton Initiative to determine which tenants would fill the downtown properties.

“There was a real strategy that was involved. There was some market research that was done and some feedback from the community that was considered. That’s why we went around and recruited certain tenants. The other thing was, we didn’t want to have any one business be so similar to another business, just because it’s so small here. I think we did a pretty good job of that; we continue to search for that perfect mix downtown,” Mantaro said.

Proprietress of SWANK Erika Perez discussed her experience as one of the Initiative’s tenants. In its five years as a tenant, SWANK has expanded three times and currently occupies a 3,200 square foot space.

“We find the Initiative to be easy to work with. They understand our business needs and our need to grow,” Perez said. “They’ve always allowed [us] flexibility to grow and to stay within a budget of sorts so that we remain profitable.”

“I always want to get out there and talk about the Initiative… I really feel strongly that we’ve done some significant things in Hamilton and have made a big impact,” Mantaro said. “When you drive around here at night, it really does twinkle. It just looks beautiful here. It’s so idyllic. It’s just great.”