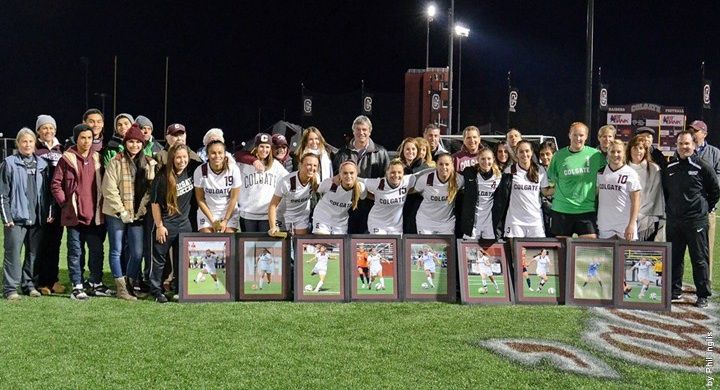 Senior Raiders celebrate the last regular season home game with a victory and share the moment with friends and family. They look forward to carrying the Raiders into Patriot League play.

Prior to the start of Saturday’s competition, the team and their families honored its nine senior players. Following this, the Raiders were left energized and ready to take on their adversaries, which was proven when they stepped onto the field filled with vigor and intensity. Play picked up early on, with the first shot coming in the fourth minute by junior forward Sarah Coy, which was quickly followed by a corner kick by junior defender Emily Pullen and a header from senior midfielder Jenna Panepinto. In the 12th minute, the Raiders put a point on the board when senior forward Catherine Williams scored a goal on a rebound shot by senior forward Jenna Raepple. The goal was Williams’s fourth of the season, while the assist was Raepple’s fourth as well. Lafayette reciprocated just a few minutes later with their first shot of the game in the 15th minute, made by senior midfielder Anna Wissler, which went wide. This was followed up just two minutes later by junior defender Julia Wescott’s header shot, which was saved by Colgate’s senior goalkeeper Erin Cummings. Play remained close as the two teams continued to volley back and forth with shots, though the remainder of the first period remained fairly uneventful, and at the conclusion of the first half Colgate held a one goal lead over the Leopards.

Throughout the second half, the game remained close and though Lafayette continually battled to regain its lost ground, they were unable to come back and the game ended with a score of 1-0. Williams’ goal became her third game-winner of the season, making her the team leader in this category. Cummings had five saves throughout the contest, which became her fifth shutout of the season. However, Lafayette led the game in corner kicks, of which they had four, while Colgate had two. Additionally, Lafayette’s two goalkeepers, sophomore Kelly O’Brien and junior Danielle Sedillo, had six saves between them.

After closing the regular season with this victory, the Raiders are both excited and optimistic about the post season. About the game and the season, Colgate’s head coach Kathy Brawn had some insightful comments to share.

“I am proud of the way everyone stayed determined to play our way into the postseason. We might not have traveled the easiest route, but we hung together and are looking forward with great focus and enthusiasm,” Brawn said.

Next up for the Raiders is the Patriot League tournament quarterfinal game. The victory against Lafayette cemented its fifth-seed position. The team takes on Loyola on Tuesday in Baltimore. In regular season play, the Greyhounds defeated the Raiders 3-2 when Colgate hosted on October 24. With this upcoming game, women’s soccer and its rivals are awarded a chance at redemption against their Patriot League rivals.