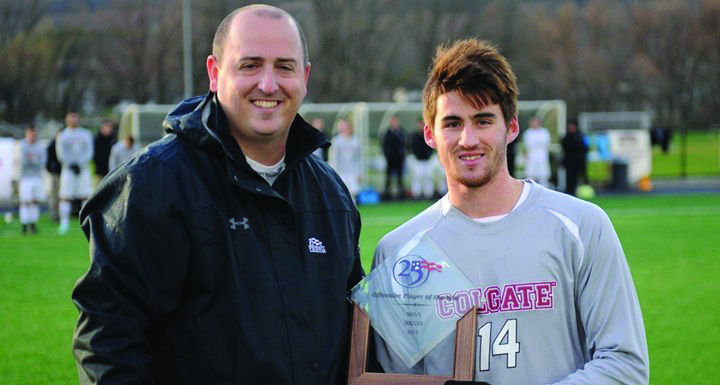 Junior forward Ethan Kutler, earned Patriot League Offensive Player Of The Year prior to the tilt against Lehigh; unfortunately, he was unable to lead Colgate to victory.

Colgate’s impressive season came to an abrupt end on Friday with a 2-0 loss to Lehigh in the Patriot League tournament. The Raiders, who entered the year ranked seventh, surprisingly finished the regular season with the right to host Friday’s semifinal match after claiming the regular season championship; it was an astounding feat. While the team started the season slowly with a win and two losses, they eventually found a spark that catapulted them to finish the season with six straight Patriot League wins. This hot streak left Colgate with a conference best 7-2 record and the confidence to make a deep run in the tournament.

The Raiders finished at 10-7-2 in a season filled with success and achievement, and one that left the players and coaches feeling proud. Beyond clinching the Patriot League regular season crown for the first time since 2010, they continuously entertained spectators with wonderful play and brilliant success. In fact, six student-athletes earned spots on the all-league team, including junior forward Ethan Kutler who was also named Patriot League Offensive Player of the Year. Even the coach, Erik Ronning was named 2015 coach of the year – a full team effort. In addition, junior midfielder Colin O’Neil and junior defender Zach Tamen were named to the all-tournament team.

The game was a close one with Colgate actually having more shots than Lehigh (11-10) and one less shot on goal (4-5). An early attempt from first-year midfielder Tim Oberg, which just crept over the bar, instilled a lot of hope for fans, but Lehigh pulled ahead soon after. With their second shot of the match, the rival Mountain Hawks scored off a low cross in the 18-yard box. Minutes later, they scored their second and last goal, pushing the game out of reach. The game ended with this 2-0 defeat.

Despite the lack of goals on the offensive end, it was a well-fought match for the squad in maroon and white, especially from sophomore midfielder Troy Moo Penn, Kutler, sophomore midfielder Jared Stroud and junior goalkeeper Ricky Brown. While it might have been a little disappointing for the home team, there was a lot to smile about for Raider nation. Graced with such a young team, they can only get better and the next few years of Colgate soccer will definitely be a spectacle at the very least.

Lehigh definitely deserves some applause for their win too; it is not easy beating this all-star team. With the win the Mountain Hawks moved on to the championship game against American University where they won 2-1. Although the loss against Lehigh stung, playing so competitively with the Patriot League champions shows just how close the Raiders were to winning it all. The Raiders continued to challenge Lehigh on every ball and fought until the very end. Given the turnout for this game, fans cannot wait for the start of next year, where the Raiders will hopefully go for another title and continue their winning ways.

Regarding the season overall, head coach Erik Ronning had some thoughtful insight and remarks on the Raiders’ season and their tough loss so close to securing the Patriot League title.

“It was a memorable season, one that we can build on moving forward. I would like to thank the senior class for their contributions to Colgate soccer over their four years. We would not have had the season we had without them, and they leave this program in a better place when they arrived,” Ronning said.

Colgate will see many key players return next season and as the team grows and develops their talents and chemistry, they can expect to be back in the tournament and potentially make an even deeper run next year.