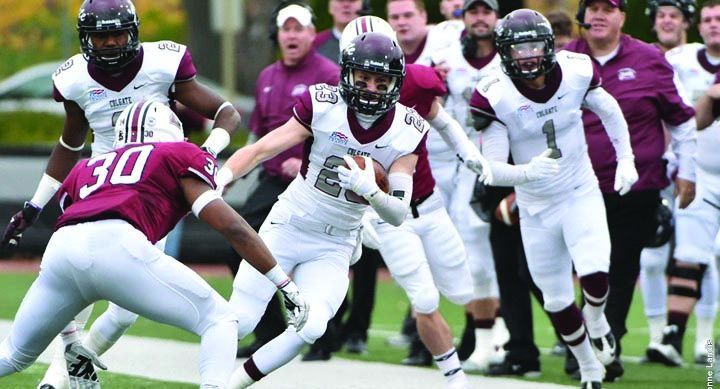 Returner and senior defensive back Ty McCollum returns an interception against Patriot League rival Lafayette. The Raiders hope to capture their first league championship since the fall of 2012.

Colgate traveled to Easton, Pennsylvania this weekend and walked away with a crucial 28-19 victory over the Lafayette Leopards. The win helps the Raiders retain first place in the Patriot League and sets up a Patriot League title matchup with Lehigh in Hamilton this weekend.

Although it was not easy, the Raiders, 5-4 in the regular season and 4-0 in the Patriot League, improved their record to over .500 for the first time this season. The now 1-9 Leopards gave the Raiders a challenge from the start by jumping out to a quick 7-0 lead after Raiders junior defensive back Chris Morgan fumbled the opening kickoff. The Leopards added a touchdown on the ensuing possession and also added two field goals to jump out to a 13-0 first quarter lead.

But the Leopards would only hold that lead for one quarter, as sophomore running back James Holland continued his torrid touchdown pace by adding two short runs that gave the Raiders a 14-13 halftime lead. Junior quarterback Jake Melville continued to impress with his running game, as he scored on a 16-yard run early in the second half.

After the Raiders’ defense held the Leopards to two consecutive field goals, Holland went on to add a third touchdown, a one-yard plunge that capped a 12-play, 77-yard drive that chewed up 6:32 of the fourth quarter clock to seal the victory for the Raiders.

Once again the Raiders’ defense held strong. Coming off his FCS Player of the Week performance against Fordham, junior linebacker Kyle Diener added 12 tackles, followed by senior linebacker Cameron Buttermore who had nine tackles and a sack. Sophomore outside linebacker Pat Afriyie added two sacks of his own to lead Colgate’s defensive line that lived in the Leopards backfield all day long. When asked about the performance of the defense despite the team’s slow start, Diener stressed the ability of his side to be resilient.

“We got put in some tough situations and, except for that first touchdown, held them to field goals. The entire defense stepped up; 34 rushing yards kind of speaks for itself,” Diener said.

Senior cornerback Ty McCollum had the best game of his career on Saturday where he made two interceptions. The final came with just 2:58 remaining to end any hope of a late Leopard resurgence. The two interceptions for McCollum served as some redemption for him, as he was beat on the opening touchdown pass. After nearly surrendering the lead on the final play of the game last week against Fordham, the Raiders’ defense shut the door on any possible comeback.

Colgate was able to stifle the Leopards for most of the second half without starting sophomore safety Keyon Washington. Washington was ejected in the third quarter after being penalized for targeting a defenseless receiver after he made illegal contact with the helmet of a Leopards receiver following a catch across the middle of the field. Washington will be suspended for the first half of the Lehigh game pending his illegal hit being upheld by Patriot League officials.

If the Raiders can defeat Lehigh on Saturday, the Raiders will claim the outright Patriot League title for the first time in the Dan Hunt era. The Mountain Hawks (5-4, 3-1) will come into the matchup looking to upset the first place Raiders after defeating Holy Cross 51-38 on Saturday. Kickoff is 1 p.m. at Andy Kerr Stadium.