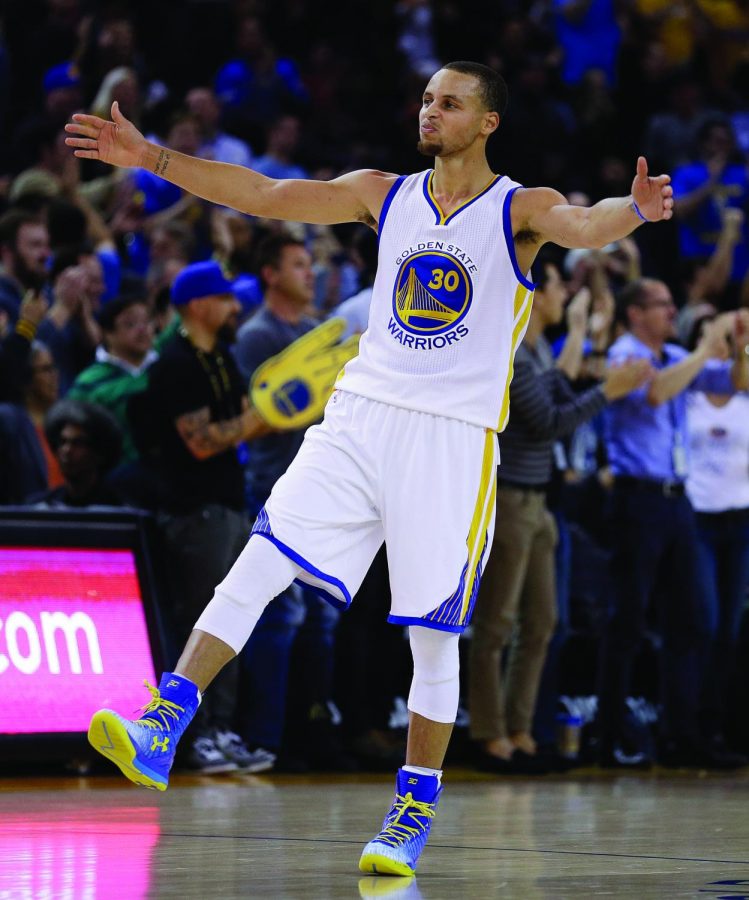 Steph Curry has led the Warriors to a 7-0 record in the new season after leading Golden State last year to their first title since 1975.

Steph. Chef Curry. Wardell. Riley’s Dad. Whatever you hear him being called, you know it’s followed by an amazing feat that he’s accomplished. This season has been another record-breaking year for Curry while also leading the Warriors to a 7-0 record in the process. Curry has averaged 33.9 PPG, leading the league in points, and has also made 38 three-pointers, far ahead of the rest of the league. His acrobatic plays and ability to see the floor are unparalleled around the league, making the Warriors the most exciting team in the league. Not only has Curry led the Warriors to an undefeated record, but he is also doing it in outstanding fashion, demolishing all competition in the way. The Warriors won their first four games by an average of 25 points, including a 50-point win against the perennially good Memphis Grizzlies.

Within Curry’s first six games, he’s surpassed 200 points, 30 rebounds and 39 assists, a feat only reached by Michael Jordan and Oscar Robertson. When Curry was drafted, no one could have expected the Davidson alum to put up numbers comparable to some of the NBA’s greatest players ever. Curry’s days at Davidson have translated nicely over to the NBA. Curry led Davidson, a small private school in North Carolina, to the Elite Eight by taking down multiple of the NCAA’s top teams. Now, after a few years of struggling to find his place and dealing with ankle injuries, Curry has turned his team into an annual championship contender.

Although Curry is the face of the Warriors, the rest of his team also keeps the Warriors at the top of the standings. Next to Curry in the backcourt is the other half of the Splash Brothers, Klay Thompson. Thompson is also a 3-point specialist and a defensive monster. Last season, Thompson’s shining moment was when he put up 37 points in the 3rd quarter against the Kings, setting an NBA record. Although Curry has been carrying the load more than Thompson has this year, Thompson’s potential is through the roof and he’s sure to break out as the season goes on.

Draymond Green also made a name for himself last season as a reliable part of the Warriors roster. His tenacious defense and ability to fill up the stat sheet makes him a valuable asset to the squad. Another aspect of the Warriors team that adds to their success is the depth of the team. Andre Igoudala, the 2015 NBA Finals MVP, still comes off of the bench and contributes heavily each game. With Leandro Barbosa, Shaun Livingston and Marreese Speights, the Warriors bench has some quality that adds to the

consistency of the Warriors’ success.

The Warriors are a force to be reckoned with this season. With so much to lose, the Warriors have a target on their back at which every other team in the NBA is aiming. At 7-0, beating powerhouses like the Clippers and Rockets, the Warriors have established themselves this season as the hardest team to beat. They have a tough schedule coming up against the Pistons and eventually the Raptors, but at the rate that they’re playing, the Warriors are going to need a stronger force to stop them. Look for Chef Curry to be cooking in the NBA Championship again this year.