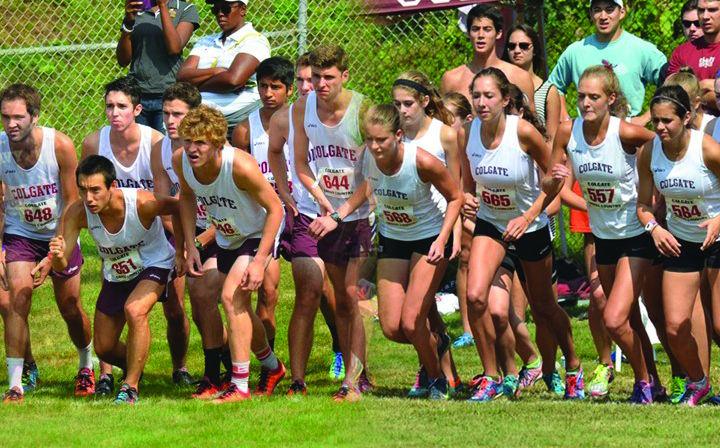 Both the men and women’s cross country teams participated in the Patriot League Championship race held here at Colgate this past weekend;  the men placed ninth on the day and the women placed tenth on the day.

While most students were eating a Saturday brunch with their parents, the men’s and women’s cross country teams were competing in the culminating race of their season, the Patriot League Championships. Colgate hosted the race for the first time since 2012, as Patriot League teams from across the northeast streamed into Hamilton. The race is run on the Harry Lang course, located above the Chapel House, and as any Colgate student can imagine, the course is composed of a multitude of hills throughout. The day started with the men’s race, which was an 8K, or eight kilometers. The Navy Midshipmen dominated the day, controlling the race from the outset and taking the top four individual spots in the race, with their fifth runner rounding out their scoring coming in ninth place.

The Colgate men, who have endured injuries to several key runners throughout the year, came in ninth place on the day. The Raiders were paced by sophomore Watson Hanson who crossed the line in 50th place with a time of 26:21. Hanson has come on strong as of late to help replace the loss of one of the Raiders’ top runners, junior Bobby Galante, to injury. Behind Hanson, a mix of underclassmen and upperclassmen filled out the Colgate scoring. Senior leaders Cody Hawkins and Chris Noda came in as the second and third runners for Colgate respectively, who throughout the season have brought consistency to the underclassmen laden team. Sophomore Danny Palladino was Colgate’s fourth across, using a strong second half of the race to stop the clock at 27:13. Rounding out the scoring for the Raiders was junior Troy Kelly.

While the Raiders were in the bottom half of the scoring this year, there is plenty of promise for next year’s team. Current sophomores Watson Hanson and Danny Palladino will be at the forefront of the attack, along with Galante. Also returning next year is Tim Englehart, who should provide a spark to

On the women’s side of the docket, Bucknell was able to edge the perennially strong Navy by placing their top three runners in second, third and fourth place overall. While Navy senior Kelly Robinson won the race overall, the depth of the Bison prevailed. The Lady Raiders raced to a tenth place finish in the Patriot League, with four of their top seven runners as first-years. Setting the tone for Colgate was sophomore Caroline Falvey, who completed the hilly course in a time of 23:16, good for a 41st place finish. Falling in close behind Falvey were junior Rebecca Easly and senior Holland Reynolds. Finally to close the scoring were freshman Ashley de Hechavarria and Caroline Zaworski.

These five runners were spread out by a total of 42 seconds, the second smallest spread in the race. The pack running and youth on the women’s team provides lots of promise for upcoming years.

Although Patriot Leagues are considered the most important race for the team, the Raiders will continue on to compete in the NCAA Regional Qualifier, which will take place on November 13 in Boston. Hopefully the Raiders will come ready to battle during this qualifier.