A Deeper Look into the Infamous “Slices” 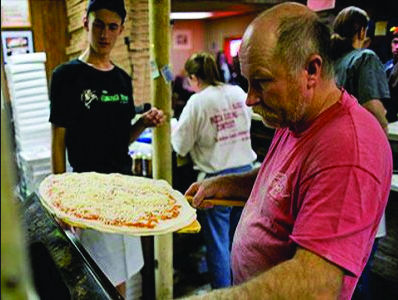 A first-hand look at a slice entering the over.

Go to New York Pizzeria in downtown Hamilton, New York on a late weekend night, and you will find it full with mostly intoxicated Colgate students. The overhanging sign that reads “slices come plain only” is the signature motto of the restaurant, as well as the first thing you see when you walk through the doorway. Students can be heard ordering slices by the pie, along with a side of ranch. Employees of this establishment, which was mentioned in  Buzzfeed’s “Best Drunken Eats in College Towns Across America,” are fervently swiping ‘Gate cards, as well making whole pizzas and putting up with drunken college students on a nightly basis. Slices is typically a pre or post-destination spot for the nightlife here on campus. Students usually go for a couple slices for some pre-partying energy, or after a night of drinking and dancing at a party or the infamous Old Stone Jug.

First established in 1977, New York Pizzeria, coined “Slices” by Colgate students, has been a part of the Colgate experience for nearly 40 years. Slices is by no means an elaborate establishment. Rather, they pride themselves on simplicity and efficiency. It is very much a restaurant you would expect to see in a college town, as well as one that you would be thankful for after long nights when a slice of greasy, homemade pizza seems to be the only highlight of the evening. When students are asked about Slices, it’s usually followed by a smile and a laugh, as many memories have been made in the small restaurant, usually at the oddest hours of the night.

When asked about their Slices experiences, many students said that they welcomed it as a great alternative when they’re tired of dining hall food.

“It’s good at all times of the day,” first-year Alec Dardis said. “I look forward to it. It’s a little bit of a walk, but it’s definitely worth it.”

Most students agree on a particular way of eating slices.

“The best way to eat slices is with ranch and late at night when Frank runs out of food,” first-year Naomi Gneco said.

The notorious “slices come plain only” has confused and sometimes infuriated many Colgate students. The reason is straightforward.

“One word: speed,” Everett Hanse, owner of Slices said. This is understandable as crowds of students swarm the countertop asking for at least two slices at a time. The recipe for their classic slice comes from a similar philosophy.

As predictable as the slices are, the behavior in Slices is anything but. Hanse was eager to share his craziest Colgate student experience.

“Three or four guys came in naked for a fundraiser, absolutely naked. I think they got $200 for it,” Hanse said.

Residents of Hamilton sometimes view Colgate students in a negative light. Slices employees seem to have plenty of reasons to disapprove of the rowdy visitors.

“It’s hard to explain how I feel about them because…we only get Colgate students in here. We don’t have anything to compare them to. They’re just young people and that’s the way they are I guess,” Hanse said.