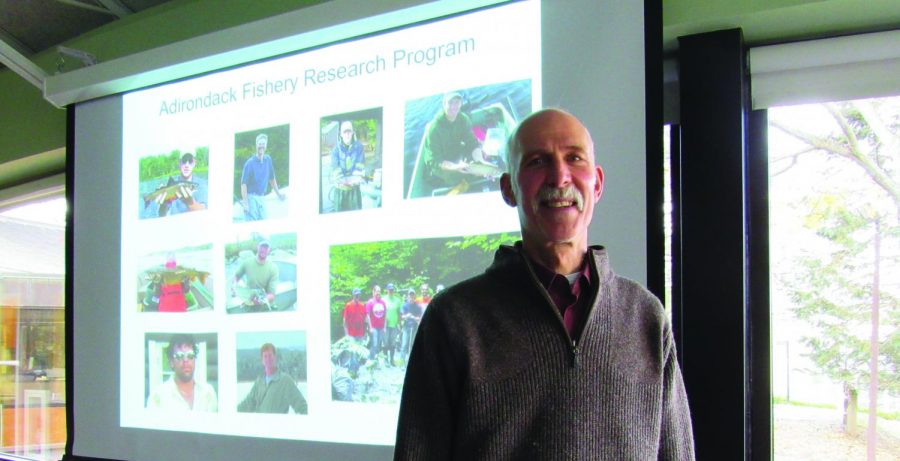 Professor Kraft explained the threat posed by acid rain on the trout population in the region.

The Environmental Studies department continued its brown bag series with the lecture “Fisheries in an Ecosystem Perspective: Acid Rain in the Adirondacks” at the Africana, Latin American, Asian American and Native American (ALANA) Cultural Center on Friday, October 30.

Associate Professor in the Department of Natural Resources at Cornell University Clifford Kraft presented the lecture. The brown bag primarily discussed the effect of acid precipitation on the brook trout population, which can be found in over 500 lakes and ponds throughout the Adirondack region.

Kraft delved into the history of the brook trout population, focusing specifically on the population in Honnedaga Lake. From 1890 to 1930, fisheries’ management added lake trout, creek chub, round whitefish and white sucker to Honnedaga Lake, in addition to the native brook trout population. In the following time period from 1930 to 1950, fish populations started declining in the lake, with brook trout declining rapidly. At the time, no one measured the acidity (pH) of the lake, which was the main cause of the decrease in the respective fish populations.

Today, tributaries and groundwater basins in Honnedaga Lake provide a pH refuge and thermal refuge habitat in terms of water acidity and temperature, which is suitable for brook trout survival. New research studies have been conducted within the past fifteen years which reveal that brook trout can be found in tributaries with low aluminum concentrations.

Kraft predicts a positive future for the Adirondack brook trout, even though this coldwater fish could potentially be threatened by warm water temperatures caused by climate change. The Clean Air Act Amendments of 1990 have brought about effective government regulation and have helped improve the plight of the brook trout population in the Adirondack region.

“We have a whole seminar series, but we also within the brown bag this year had kind of a sub-theme of trends in acid deposition in the Adirondacks. So this was one of several talks that were devoted to the patterns of change, which have, in large part, been positive in our region of upstate New York,” Kraly said.

The scholars who presented the brown bag sub-series lectures are Fuller’s colleagues in the Northeast, where Fuller researches how geology in the Adirondacks affects the water chemistry of precipitation, groundwater and surface water.

“Usually, the composition of the [Environmental Studies] seminar reflects faculty interests, colleagues that they’d like to bring and share with their particular classes. So this actually has worked out quite nicely, because it connects to the Upstate Institute and the theme connected to the senior seminar,” Kraly said.

Through the brown bags, Environmental Studies students are invited to examine the issue of climate change.

“When you think about climate change and global warming, I think so often students and all of us are looking for ways to see progress happening and some needles pointing in a positive direction, rather than in a negative direction. We, in fact, are asking our students in our senior seminar to find other examples of environmental problems for which we have witnessed some positive directions in some cases, and to reflect upon, either in the Adirondacks or their particular case studies, how this can inform producing positive change in terms of climate change,” Kraly said.