Lampert Institute Explores the Role of Food in History and Society 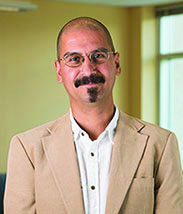 Professor Kawall is the organizer of this year’s Lampert Series

Each year, the Lampert Institute for Civic and Global Affairs conducts a series of lectures on a different theme. While last semester’s series focused on happiness, this year the chosen theme is on food and its complex impacts on society and culture.

“We can see the importance of food to culture in many ways – consider the role of food in the celebration of holidays and religious observances across cultures. Family life is shaped by shared meals and conversations over food; we have the phenomenon of ‘comfort food’ and ties to our past. For many people, food can also serve as an important part of how they identify themselves – as a vegetarian, or vegan, or in keeping kosher, etc.,” Director of the Institute and Associate Professor of Philosophy and Environmental Studies Jason Kawall said.

According to the Colgate website, the Lampert Institute was formerly known as the Institute for Philosophy, Politics and Economics. Though the name has changed, its goal of looking at how a particular issue has both global and local effects remains the same.

There were several lectures on the chosen topic already this year, including “Edible Memory: How Tomatoes Became Heirlooms and Apples Became Antiques” by Professor of Sociology and Urban Studies at University of Wisconsin, Milwaukee Dr. Jennifer Jordan, as well as “Experiences and Perspectives from Local Food Producers,” featuring three local food producers in the region.

Other lecture topics included how climate change might impact the future of food, the impact of geography on nutrition, agricultural biotechnology and even slavery. These lectures have looked at the diverse impacts of food on history and on our world today.

“Given the essential role of food in sustaining human life, it has had profound and ongoing influences on human cultures. These influences range from the cooperation and division of labour involved in simply acquiring food – which have shaped a broad range of social structures, to the simple accessibility of food – where people settle, and how their community forms is largely dependent on such accessibility. And these are not simply influences in the past – they are ongoing and pervasive,” Kawall said. “We have vast infrastructure devoted to the cultivation and distribution of food – tens of millions of people in the USA have jobs within the food industry, broadly construed.”

This week alone there are two lectures in the Institute’s series, including “Famine in Ukraine (1932-33) and Its Implications” by Professor of History at Yale University Dr. Timothy Snyder and “Controversies over the Religious Slaughter of Animals: A Product of European Anti-Semitism and Islamophobia?” by Professor Emeritus of Food Science at Cornell University Dr. Joe Regenstein.

“Food topics and issues are becoming increasingly prevalent in both academia and mainstream society. There are many questions surrounding biotechnology and food production that are coming to the forefront of both ethics and politics. In addition, more and more individuals are becoming concerned with how their food is produced and where it is coming from,” Lampert Associate junior Jenna Walczak said. Her role in the program involves attending the lectures and having the opportunity to meet and talk to the speakers in the series in small discussion groups.

Walczak explained that the Lampert Institute hopes to look at this issue from many different perspectives.

“The goal of the Lampert Institute’s food series this year is to discuss a wide variety of topics concerning food production, consumption and cultural beliefs. Talks in the series have ranged from discussions of heirloom tomatoes to Halal and Kosher slaughter practices,” she said.

“Broadly, the series is intended to bring leading researchers doing important, cutting-edge work to Colgate, in order to enhance and complement other speaker series on campus, and especially to enhance and complement various courses on campus. Thus we seek themes that are of contemporary interest and importance, that cut across traditional disciplinary boundaries, and that raise significant policy questions (again both domestically and internationally). More generally, we also hope that the series inspires further dialogue on-campus, and brings attention to some of our other programs – in particular, the Lampert Fellowships in Public Affairs,” Kawall said.