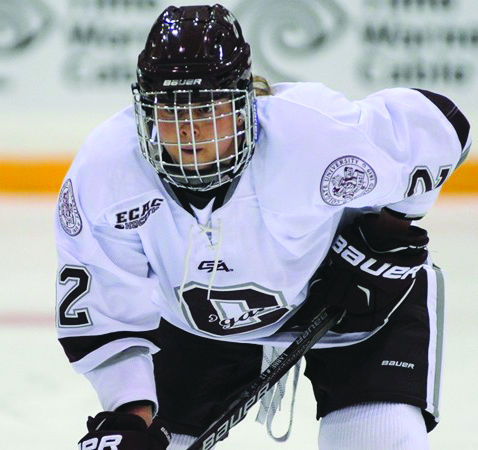 First-year forward Shae Labbe focused on creating opportunities for the Raiders, and tallied her seventh goal this season to lead Colgate to victory.

The women’s ice hockey team defeated the Rochester Institute of Technology (RIT) Tigers on November 13 and 14 in back-to-back games. The Raiders pulled through the first game with a close 3-2, and won again 3-1 in the second game.

When asked about the reasoning behind the Raider’s success this weekend, assistant coach Josh Sciba said it was partly due to the excellent goal tending and killing off some big penalties at key times during both the games. First-year Julia Vandyk made 32 saves throughout the second game, only letting in one goal, which resulted in her second win as the goalie for the whole game.

“Honestly, I think just having good process and focusing on us for 60 minutes, especially on Saturday was huge for our group. We talked a lot about our process this weekend and sticking to our identity,” Sciba said.

First-year Shae Labbe is currently leading the team in goals, scoring her seventh goal of the season during the second game.

“Our expectations as a team are that we put everything we have into making playoffs and then fight to win a championship. The cool thing about this is that we are all very motivated and confident in our abilities to do just that,” Labbe said.

According to Sciba, a key point in the second game was a short handed goal scored by first-year Bailey Larson that helped to shift the momentum in a positive direction for the Raiders.

“Everyone is buying into their role and is committed to getting better every single day. As coaches, we believe in strong leadership and we’re leaning on a strong group of captains who do a great job of holding the team accountable to our core values.  They set the bar high for what we do every day.  It’s been a lot of fun to coach.”

The team’s overall record is currently at 6-2-4, remaining at 0-1-3 in the ECAC conference. This year, the coaches have decided to take a different approach to practice time. Practices are shorter, designing to  allow the team to focus better and play harder.

“Our goal is to play fast this year. We’ve shortened practice and increased the speed and intensity. We’re constantly emphasizing a high pace at practice, taking less time at the board drawing up drills and performing drills at top speed.”

In addition, the coaches have allowed a few extra days off if the women need it to ensure they can be 100 percent the entire time they step on the rink.

“We’re pushing kids outside of their comfort zone and we’re seeing it translate to success in games. In addition, rather than worrying about drills and systems, we’ve tried to focus more on skills and concepts. It’s definitely been a more effective method for our group,” Sciba said.

The Raiders are currently preparing for their rivalry game against Cornell later this week, hoping to come out with the win.  The team isn’t going to change much due to their past success.

“I don’t think we’ll be changing much. Maybe a few tweaks here and there, but we believe in our group and we have the right people in the right places now, so it’s just a matter of us playing to our identity,” Sciba said.

The Raiders hold the expectation for themselves to make it to the playoffs this year, regardless of their underclassmen- dominated team. However, their main goal currently is to focus on league play and to get a little better each day.

“We have a young group, but a very hungry group as well. The girls have done a great job of changing the culture of our program, and now we’re working on taking that next step,” Sciba said.

The Raiders face off against Syracuse this coming Friday at home. The game is scheduled to start at 7:00 p.m. at Starr Rink. The following week, they will host Mercyhurst for a double header. While the majority of students will be off campus, all three of these games can be streamed live via the Colgate Athletics website.