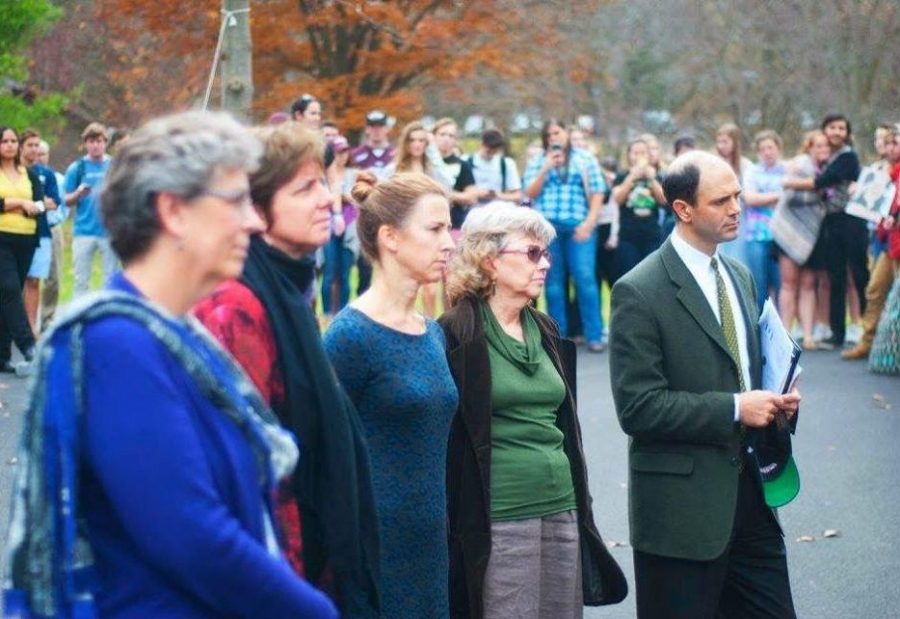 Rugg, Nelson, Taylor, Harsin and Brown appear at the protest.

On Thursday, November 5, student leaders on campus organized a protest outside of the Center for Women’s Studies and a speak-out at the Colgate Memorial Chapel. The protest was a reaction to some students’ frustration with the administration’s response to the data released by the Higher Education Data Sharing (HEDS) Consortium’s results, and addressed sexual violence experienced on this campus. These data were collected in the spring 2015 semester, and the results were released to the Colgate community on Tuesday, November 3.

Members of the Association of Critical Collegians (ACC), juniors Rachel Drucker, Dayna Campbell and senior Madison Paulk, and members of the student group Colgate Forward, seniors Bailey Graves, Monica Murphy and Susan Miller, organized the protest and worked to construct the 11-point action plan. The organizers believe these demands would improve issues of sexual violence on campus and focus on supporting survivors who have already experienced this violence.

The leaders of the movement spoke about how impressed they were by the number of students who joined the protest to support survivors of sexual violence on campus and listened to their stories at the speak-out.

“I was pretty moved by the turnout. I think the number of people that we had join the human chain were about to extend all the way around East [Hall], and then,  just as packed as the Chapel was, that was pretty moving,” Murphy said.

“So just to step away from the data just a second, the federal government and NY State have influenced what happens in this area with the 2014 You’re Not Alone Task Force Report and the 2015 Enough is Enough law passed in NY State, where it is made clear that we need to do more to assess progress. And we’ve got to be more transparent about sharing this information with the community. Colgate did this ahead of when we were obligated to do so via the Enough is Enough law. And for those of us who have been doing this work for a while – I’ve been around now being a Dean for over 20 years – this is transformative. The fact that schools are actually sharing these data is really a big deal, because it’s not how it’s been,” Nelson said.

Despite this, Nelson noted the importance of hearing about students’ experiences, while also being able to understand what the statistics represent.

Since the movement, the administration has sent emails to the Colgate community as a means of updating the campus about what has been done thus far and what the administration is currently working on. In a correspondence from Interim President Jill Harsin sent Wednesday, Nov. 11, Harsin noted the work the administration aims to accomplish through the Sexual Violence Prevention and Survivor Support Action Plan. This five-step action plan lays out steps that the administration is planning to take that are focused on issues of sexual violence on this campus. According to the same email, Nelson and Harsin are working to put together a task force, which will include faculty, staff and students, as a means of making sure the actions in this plan continue to be pursued.

According to Nelson, the University plans to bring in professionals who will work with the task force as a means of better understanding Colgate’s campus and an effort to create ways to improve the sexual climate.

“We have good ideas, but there are people who are experts in the field, who have worked on other campuses, who might have other ideas that we should consider too,” Nelson said. “They’ll focus sessions with various stakeholders, and they’ll gather information, look at our policies, look at our protocols and then make recommendations. The task force will take that external review, and they will infuse that into our own, current action plan.”

The administration’s action plan is not identical to the 11-point plan presented by the student leaders, which Nelson explained was due to the fact that some of the demands are more difficult to implement than others.

“What we want to do now is to be forward thinking because we are in agreement about the types of things that have to happen on this campus. And maybe not every single solitary thing, but by and large, we are in agreement about the direction in which Colgate needs to go, to prevent sexual violence on our campus and support survivors. We have to still keep the sexual climate, positive sexuality initiatives going. Because these efforts are all linked. They all are connected,” Nelson said.

She also pointed out the continued importance of student-led initiatives on campus, such as Yes Means Yes and “This is Not a Play About Sex,” as a means of fostering a more positive sexual climate at Colgate.

However, the student leaders of the protest and speak-out remain skeptical of the administration’s response, noting they have had multiple meetings in conversation with administrators to try to work on this topic.

Drucker is frustrated by what she sees as a lack of emphasis on support for students of marginalized identities or different sexual orientations and believes this is something that still needs to be assessed when it comes to making changes to the sexual climate on campus.

“I also think that as much as [the administration says] that they’ve been working on these things already, a lot of the demands are things that they haven’t been working on,” Drucker said. “We were very intentional in that conversations about sexual violence shouldn’t be race neutral, should acknowledge sexual orientation, all these differences, and I don’t think that any of their action steps really reflect that.”

“I also think that a lot of times when an administration tries to fix things it just has that same kind of polished look over it, and I don’t know if it’s necessarily going to get to the meat of the matter,” Campbell said.

Drucker, Campbell and Murphy noted that the response from the student body to the protest and speak-out has remained somewhat unclear to them. Although they acknowledged there was support at the protest and speak-out, Drucker noted that attendance at these events represents only a small portion of the student body. While there was a negative response on Yik Yak, an anonymous forum where community members can post comments without attaching their names to these statements, Drucker, Campbell and Murphy conveyed how just a small number of students on campus may have made these comments. The administration has also acknowledged destructive posts on Yik Yak, warning the community in a recent email that Campus Safety has the ability to further investigate such posts.

Drucker also said the student leaders were open to hearing constructive criticism about the movement. Rather than disparaging comments on Yik Yak, the leaders said they would prefer to talk about students’ perceptions about the movement and issues of sexual violence on campus through productive conversations.

“There really is not that much conversation, it’s like attacking and debate, and I think that that’s been the most frustrating thing, seeing the same type of negativity, without people actually willing to engage in a conversation about why you even feel the need to have a demonstration or have a speak-out,” Campbell said.“Nobody seems to want to find out the intricacies [of the protest] but they want to trivialize something that a lot of thought went into.”

“I think people are afraid to disagree…And I think that maybe people are afraid, with this conversation, to mess up and make a mistake and say something that will offend people, but at the same time we’re never going to move forward if no one talks,” Drucker said.

Both the student leaders and Nelson noted the importance of hearing multiple voices and involving more students in dialogue about this issue.

Drucker, Campbell and Murphy said they have received support from some of the faculty and staff members on campus.

“Professors have always been, to me, the most supportive people on this campus, ever since the beginning of [my] first year. But, I don’t think that they have to have an organized meeting to do that. They just do it because they care about people, and they care about their students. It’s not about the institution, it’s about support,” Drucker said.

Campbell noted the significant impact that professors can have if they spend some of their class time speaking about prevalent issues on campus.

“To me, that is more supportive than the business as usual model that we have all adopted on this campus,” Campbell said.

Professor of Sociology and Director and Professor of Women’s Studies Meika Loe expressed her support of the movement. According to Murphy, the Women’s Studies department, along with other departments and student organizations, has published a letter of solidarity to support the students pushing for change.

“When I saw 300-plus students surrounding the building, it was hard not to feel inspired by their bravery. At base, they wanted to humanize the HEDS data and make survivors’ voices heard,” Loe said. “I agree that it is too easy to ignore that our campus community is made up of many wounded individuals. Acknowledging the very real and ongoing effects of sexual violence on campus is so important.”

Students can further engage in conversation about issues of sexual violence on this campus by attending a weekly reading at the Center for Women’s Studies. In this new initiative, participants will  read from the book “Dear Sister,” which is a collection of letters about survivors’ experiences. The first of these events took place on Tuesday, November 17.

“We want to talk about healing and about supporting those who want to heal. We plan to hold this reading and discussion group every week in the Center for Women’s Studies, and all are welcome,” Loe said.