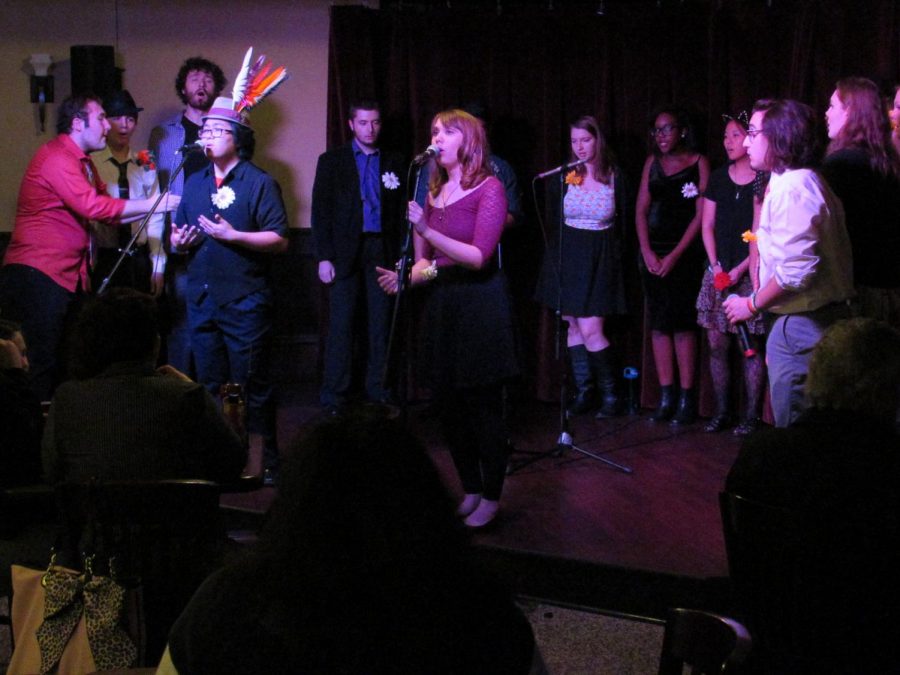 Check out senior Karl Uy’s cool feather hat! This a cappella group stood out with their snazzy style and sick jams.

The Mantiphondrakes, one of Colgate’s five a cappella groups, kicked off the Family Weekend festivities last Friday, October 30. Both students and their families packed inside of Donovan’s Pub. Beginning at 6 p.m., The Mantiphondrakes performed a varied set list, including hits like Jason Mraz’s “Did You Get My Message?,” Sufjan Stevens’ “The Predatory Wasp of the Palisades Is Out to Get Us!,” Bastille’s “Icarus,” Des’ree’s “You Gotta Be” and Beyonce’s “Halo.” There was a song for every kind of musical taste, and everyone was able to enjoy the performance. Claudia Russell, mother of sophomore Alexandra Russell, had a lot to say about the Mantiphondrakes’ performance.

“I think it was awesome,” Russell said. “I think they were great. I love their songs, just the whole vibe. It was awesome.”

The group did give a whole different vibe. The Mantiphondrakes is Colgate’s newest co-ed a cappella group, founded in 2011 by Xavia Publius and Dani Soloman, class of 2013. The group was formed in order to break away from the traditional Colgate a cappella scene, and create an open environment for all singers regardless of musical or personal background. Currently, the group is 19 members strong.  Of these 19 members, the five newest members sang solos in order to become full fledge members. The five students each took a turn soloing a portion of an elaborate Taylor Swift mash-up of songs.

The group definitely challenged the traditional a cappella group. On stage, the Mantiphondrakes created a casual and inviting feeling. Each member pinned a vibrant colored flower on themselves, as is tradition. Some wore Halloween costumes and senior Karl Uy, president of the group, donned his signature hat. They sang songs outside of the canon typically heard by a cappella groups. It is obvious that the members of this group do a cappella for the pure love of music and singing with each other. Jim Shook, father of Mantiphondrake member, senior Rachael Shook, spoke excitedly about the camaraderie of the group.

“I think they all get along. You can tell they love each other.” Shook said. “They sing different songs then from what you usually hear from glee clubs. However, I may biased.”

The Mantiphondrakes may only be a few years in, but they have certainly established themselves. The group embraces its eclectic sound and members, and takes pride in the fact that they are different from other groups. From their song choices to the way they dress, from the impressive beat boxing skills courtesy of sophomore Marc Maggiore to those bright little flowers pinned to themselves, this group created a presence that is both original and truly authentic.