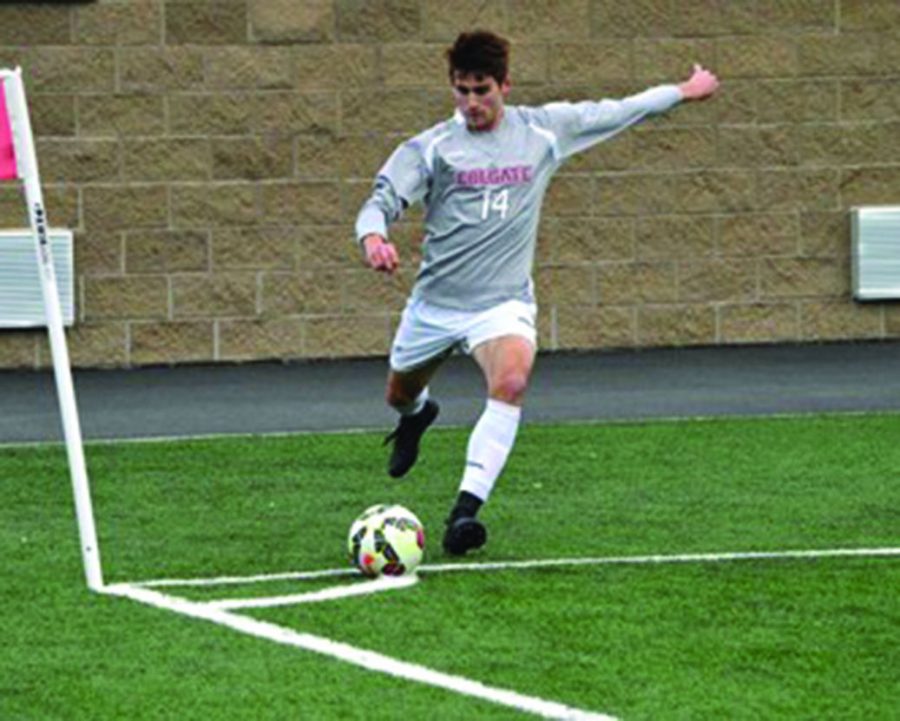 Junior forward Ethan Kutler is the Raiders’ go-to corner kicker. He has been an offensive powerhouse for Colgate as well.

The men’s soccer team had a busy week, facing Army on Wednesday and Loyola University this past Saturday. Despite a rain delay of nearly two hours, the Raiders battled the weather and came away victorious on Wednesday, defeating Army 2-1. In the 51st minute, Army broke the scoreless game with a goal. However, Colgate came firing back, with junior forward Ethan Kutler scoring the equalizer in the 68th minute. In the 74th minute, Colgate’s sophomore defenseman Karl Brown headed in the game winner and secured them the victory. Both teams ended with 10 shots on goal. Kutler led the way with a total of five. Kutler is now tied for ninth in career goals and seventh in career points.

This past weekend, the soccer team hosted the Loyola University Greyhounds in a critical Patriot League match-up. Heading into the game ranked second in the league, the Raiders knew they had to have a strong performance to overtake the league-leading Boston University Terriers.  With the 1-0 victory over Loyola, Colgate took sole possession of first place in the conference. Performing on family weekend, Colgate secured its fifth shutout of the season and improved its overall record to 9-6-2 and 6-2-0 in the Patriot League. The win also guarantees them a spot in the Patriot League tournament. The Raiders put significant pressure on the Greyhounds in the first half, but at the end of 45 minutes, the score remained 0-0. Standing out, Kutler had numerous shots in the first half, including an opportunity in the eighth minute that sailed just wide of the keeper. Kutler ended with a game-high of eight shots, four of which were on goal. Sophomore midfielder Jared Stroud had three shots as well. Colgate’s stout defense, along with junior goalkeeper Ricky Brown’s three saves, proved too strong for the Greyhounds, and secured them the shutout.

Colgate controlled the pace for the majority of the game, outshooting their opponents 18 to eight. It wasn’t until the 74th minute that sophomore defenseman Bruno Scodari sent a beautiful cross into the box. After finding the head of first-year defenseman Aram Ouligian, the ball took a fortunate bounce and senior captain Tyler Forbes got to the ball and fired a one-timer past the Loyola keeper. It was Forbes’ third goal of the season and second game winner.

“We kept it tight at the back for 90 minutes and were patient in the attack. We were creating a lot of chances and we knew one would eventually come,” Scodari said.

The goal proved to be the eventual game winner for the Raiders. From that point on, Colgate was able to maintain substantial possession of the ball and keep Loyola from having any significant goal scoring opportunities. When asked about the game in general, Scodari had some insightful comments.

“The win puts us at the top of the table. We have a ton of momentum going into Saturday’s game, and with a win we can secure a bye and host the tournament,” Scodari said.

Colgate hosts Lafayette this upcoming Saturday at 4 p.m. on Beyer-Small ‘76 Field in the regular season finale. As Scodari mentioned, a win against the Leopards would be huge, in that it would allow Colgate to host the Patriot League tournament. Regardless, of the results of next weekend’s game, the Raiders are playoff bound.