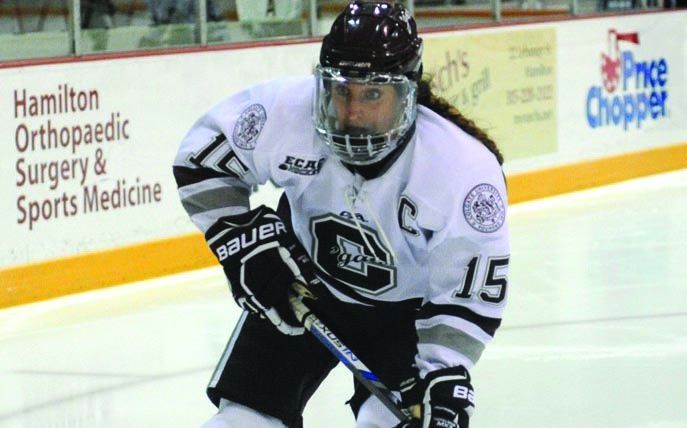 Sophomore captain Annika Zalewski stares down the competition, as the Raiders skated to a tie against Quinnipiac this weekend and a loss against the Princeton Tigers.

The game against Quinnipiac went into overtime, but the Bobcats managed to deflect any of first-year Olivia Zafuto’s shots in the last few minutes.  Princeton scored their winning goal during the middle period, followed by a goal and attempted comeback by another first-year, Shae Labbe.

Senior  goalkeeper Ashlynne Rando accomplished her second shut-out of the year against Quinnipiac, amassing 44 saves in the end.  Rando finished with 29 saves against the Princeton Tigers.

“For me it’s hard to exactly pin point my best saves. When I play in the moment every save is important and every save has to be the best,” Rando said.

Although they didn’t close with a win for the week, the fact that the Raiders tied with Quinnipiac and finished with such a competitive game against Princeton leaves the team with a positive attitude for the future.

“There’s a huge positive in that we can play with two top 10 teams in the nation and have success.  Our execution and focus in both games was phenomenal, and that’s something I believe that we will continue to take pride in,” Rando commented.

Labbe managed a goal against Princeton halfway through the third period of the game, finishing with five shots in total. Currently, Labbe has scored six goals in her rookie campaign with the Raiders.

“I have high expectations for us as a team and for myself this season. As a team we have been able to see the potential we have in playing our first games of the year. We have all the components we need to be a championship team in the locker room, we have great leadership, the ability to score goals, we are strong on defence and have successful special teams. Now we just need to make sure we are consistent with our play because once we do that, we will have the opportunity to make history in this program,” Labbe said.

Labbe also commented on her own game as she adjusts to college-level hockey.

“Now that I am feeling more comfortable with the speed of the game, my goal for the year is to be an impact player in every game I play to help the team win and reach our end goal. My goals for this season are as simple as making sure I get better each and everyday to ensure that I give myself the best chance to reach my own personal goals but more importantly help the team reach ours,” Labbe said.

Looking forward to their next few non-conference games against RIT, both Rando and Labbe said that  in order to succeed, it is crucial the Raiders keep their attention on the puck and each other to achieve their common goal. Rando also said that the team isn’t going to change anything for their next few games.

“We come to practice every day with a game like mentality, we push ourselves to be better every practice. When we play our game our way we are undeniable, regardless of who we play against,” Rando  said.

The Raiders will be playing RIT on Nov. 13 in Rochester, and will play them again at home on Nov. 14 at Starr Rink.