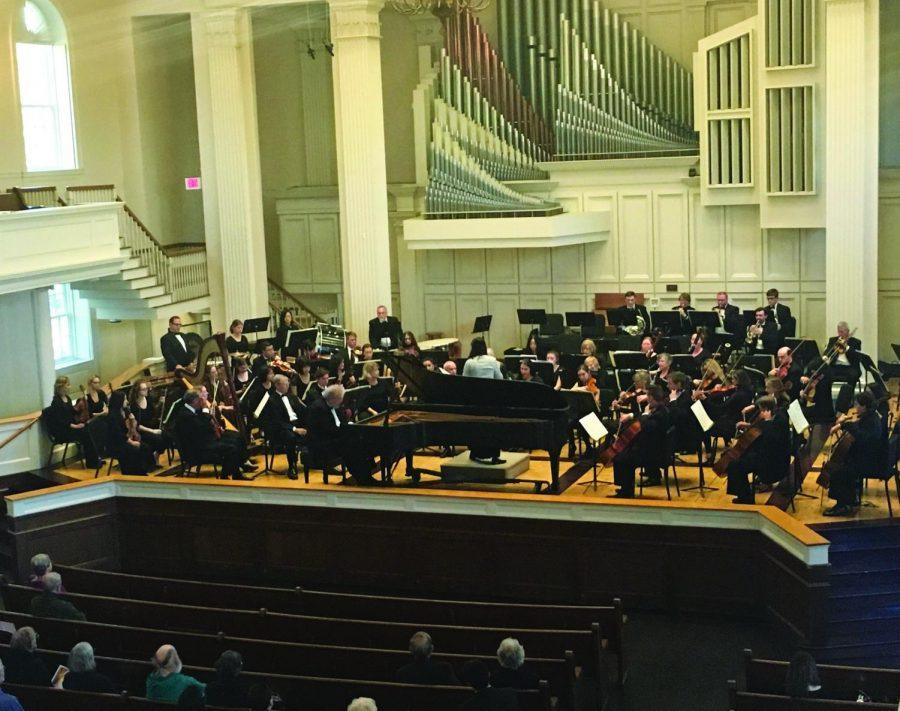 The Colgate Orchestra impressed once again and received a standing ovation from the audience.

The Colgate University Orchestra performed for an interested audience

on Sunday, November 8 in the Memorial Chapel. Under the direction of the bold conductor Marietta Cheng, the orchestra presented pieces by Maurice Ravel, Hector Berlioz and Edward Elgar.

Before the first part of the concert, Cheng welcomed the crowd and encouraged them to listen to the music with sound color, like a kaleidoscope. This first section contained instruments such as a gong and a harp to enhance the performance in addition to the ample violins. The “Mother Goose Suite” reflected simplicity and childish fantasies because of its reflection of poetry and fairy tales, ranging from “Beauty and the Beast” to “Sleeping Beauty.” The next portion, “Ravel’s Piano Concerto in G Major,” was cheerful in contrast to the typical dull, traditional classical pieces at the time it was written. The three parts of the concerto varied in tempo and tone, exuding excitement and energy at different levels.

Following this, Colgate’s Artist-in-Residence, Steven Heyman, was featured to perform a special Piano Concerto in G Major. Heyman has served as an Artist-in-Residence at Colgate since 2000, and has garnered extensive experiences, including performances in Beijing and Shenyang, China.

“[The concerto starts] at the crack of the whip, an innovative sound,” Cheng said.

Indeed, a sharp whip sound accompanied the beginning of each piano piece, in addition to the piccolo and trumpet. Heyman’s skill was evident in each note he played; it sounded as natural to him as breathing. The three sections of this concerto, “Allegramente,” “Il Adagio assai” and “Presto” each carried a different mood. “Allegramente” was more happy and upbeat, especially at the end, as was “Presto,” a fast-paced piece as indicated by its name.

At the end, the performance was met with an overwhelming standing ovation.

After a brief intermission where the audience members exchanged comments about how much they were enjoying the performance, the orchestra resumed to perform Berlioz’s “Roman Carnival Overture.” As the piece progressed, it gradually built up to become more exciting and upbeat, culminating in a profound ending. Berlioz’s piece, “Benvenuto Cellini,” was one of his most famous and originally belonged in an opera.

Finally, the orchestra performed “Variations on an Original Theme, Op. 36 (Enigma),” a collection of variations on a theme written by Edward Elgar, a famous English composer in the nineteenth and twentieth centuries.

“Elgar designed the variations to immortalize his friends with short variations of different moods,” Cheng said.

Before the “Variations” performance, Chen shared a quote from Elgar.

Indeed, when caught up with our busy lives here at Colgate, it can be easy to lose track of the simplicity of art and music. All the same, it is important to remember that the air is filled with music, and in order to live and survive, we must breathe deeply.