Around the Hill: How will the 30-second shot clock affect college basketball? 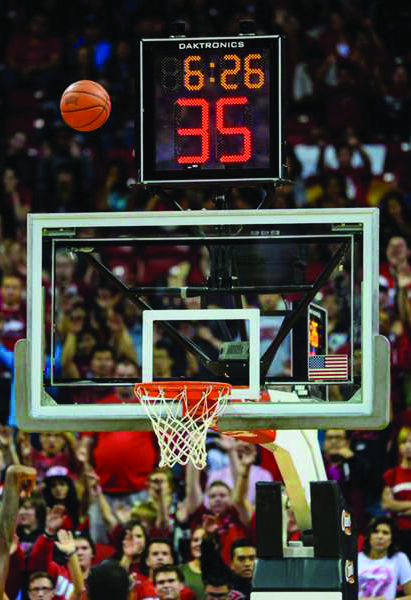 Five fewer seconds is sure to make a big difference.

The 30-second shot clock will help the quality of play in NCAA men’s basketball. Since the mid-1980’s the 35-second shot clock has been in place, which has created a more team-oriented game in which deep and balanced teams have success. However with the 35-second clock also came a slower game, a game in which lesser quality teams could shorten the game by holding the ball throughout the shot clock, giving them a greater chance to upset college basketball’s elites. With fewer possessions, these elite teams have less of a chance to pull away, and the Cinderella can thrive.

The longer shot clock also mitigated some of the entertainment of the game, slowing the pace to a halt. The introduction of the 30-second shot clock will speed up the pace of play, and will still allow for teams to run a legitimate offense. Coaches will still be able to implement the team basketball that has defined college basketball for so many years, sharing the ball and finding open shots. However, the introduction of a shorter shot clock will be inviting to the superstars of college basketball to have to force more plays, and create more opportunities for themselves, giving the college game a bit more of an NBA feel.  This will surely be a welcome sight to fans, as they will see college’s best players shine more than ever before with an increased role due to the change in the style of play. The change in the shot clock should provide an interesting twist to the upcoming season.

The new, shorter 30-second shot clock is a long overdue change for college basketball. For what seems like forever, college games have dragged and bored through the final two or three minutes of regulation. Hopefully with the change, viewers will no longer have to suffer through what seems like endless fouls at the end of regulation. The second benefit that should come from the clock change is the improvement in the overall pace of play. Viewers should be pleasantly surprised by the increase in scoring that occurs this season. With teams now under pressure to score when they have possession, we should see the ball travelling up and down the court at a significantly higher frequency.

The only drawback from the rule change could possibly come from the learning curve that players have to endure, as with any rule change. Don’t be surprised if games early in the season include a higher than average number of shot clock violations. However, any wrinkles in the timing of play should be ironed out well before conference play, and well coached teams should not have any real trouble making adjustments.

Overall, the new shot clock should convince those who have drifted away from watching regular season college basketball back to their televisions. Although, as everyone knows, the real entertainment in the sport always arrives in March.

This year, NCAA basketball will play with a 30-second shot clock rather than a 35-second shot clock. In a hope to speed up the game and balance out offense and defense, the NCAA has shortened the shot clock. This is still much longer than the NBA, which has a shot clock at 24 seconds. This means that defenses will have to hold off an offense for a shorter amount of time.

The idea behind this is simple. Shortening the shot clock helps out defenses, encouraging harder fought possessions by the defense. Critics may say lower quality of shots will be taken, however. Why then does the NBA have a 24 second shot clock? With the talent level of the NBA, speeding up play with a shorter shot clock makes sense. Games are more competitive and fun to watch as each team has more possessions per game. However, the college game always plays drastically different than the professional game. Maybe this year it will gain some faster paced excitement, especially for the top teams in the NCAA. Still, there is a chance that less talented teams will be hurt by this rule change as they find it tougher to get off quality shots against elite defenses.

In the end, even if some lower quality shots are taken, the speed and the excitement of the game will probably increase. There will be more similarities to the NBA as the pace increases, promising exciting games for college basketball fans.