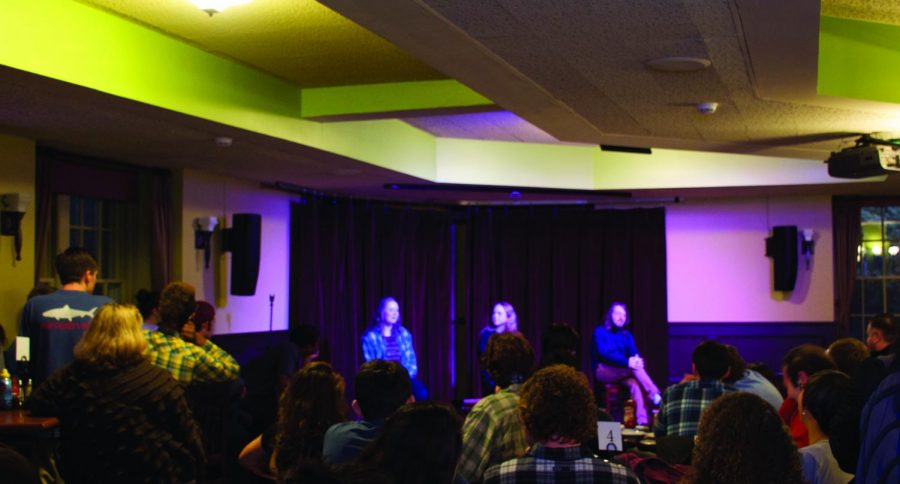 Donovan’s Pub filled up with students in need of comedic relief.

Donovan’s Pub was filled with friends and family on Friday, October 30 for Charred Goosebeak’s Family Weekend performance. Charred Goosebeak is the only improv comedy group on Colgate’s campus, composed of seven male and female students of all class years.

The group started the show by explaining what Charred Goosebeak does and how they require a lot of audience participation, something that both parents and students accepted without hesitation. The leader of the group then proceeded to explain the first skit of the night. This particular skit involved five members of the group. Two members left the pub while the remaining three asked the audience for a name of a person to be killed, an object that would serve as the murder weapon and a place where the murder happened. After many ideas being tossed around, the members of the group established a scene: Donald Trump was murdered with a breadstick at Donovan’s Pub. The two members who left the room played the “suspects” in the scene, and were interrogated by the other three members. The job of the interrogators was to get the other two members to guess all three aspects of the scene, without them saying the actual words. This difficult task resulted in an hilarious interrogation skit that filled the pub with laughter.

The group did several more skits throughout the night, including one where two members acted out a suggested scene from the audience. The difficult part for the actors, however, was that when a separate member of the group said the word “ding,” they were forced to reverse whatever they said and change the topic of conversation. Another crowd pleaser was a “dating game” where the audience assigned three members of the group as different people and objects (in this case, there was Justin Bieber, Napoleon and ketchup). The “bachelor” then had to guess what/who they were based on their answers to his questions.

Another skit that the group coined “half life” involved three members having to act out a scene that the audience came up with in one minute, thirty seconds, fifteen seconds, and lastly eight seconds, an inevitable crowd favorite.

The members of Charred Goosebeak had different reasons for joining.

“I was state improv champion in high school so I knew it was something I wanted to do when I got to college,” first-year Ian Gaupp said.

Others, like sophomore Marc Maggiore, only thought of improv once they heard about the group.

Though it is an improvisational comedy group, there is a level of practice involved to coordinate a show.

“It’s kind of like practicing for a sport,” Maggiore said. “We don’t rehearse anything, but we work on certain skills so that we can perform during game time.”

“There’s definitely a method to the madness,” Gaupp said. “It’s about getting in touch with everyone in your group and being excited about what you’re doing.”

When asked about their very unique name, both members claimed that it was a mystery.

It was a great weekend for events of all varieties here at Colgate, and Charred Goosebeak was the perfect way to kick it off. Be on the lookout for more performances from Colgate’s only improv group on campus.