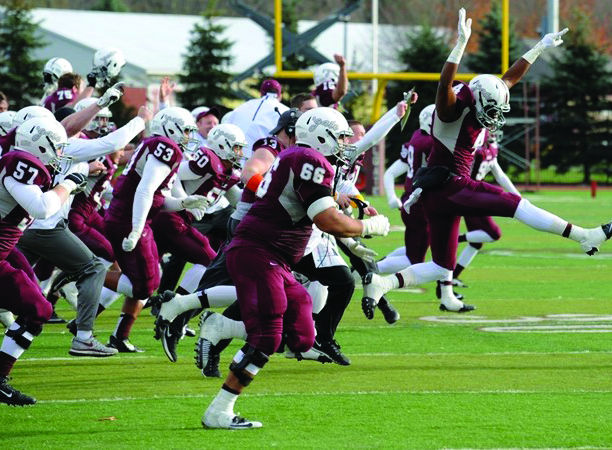 The Raiders celebrate their 31-29 victory over the Fordham Rams

Junior linebacker Kyle Diener capped a wild fourth quarter and ended a furious Fordham rally by deflecting a pass at the line of scrimmage, securing a 31-29 Colgate victory to remain the only undefeated team in the Patriot League. The Raiders (4-4, 3-0) now control their own destiny in the conference, and if they can defeat their final three opponents, they will be Patriot League champions for the first time since 2012.

The Raiders knew that defeating the No. 11 team in the country would be no simple task. But following sophomore running back James Holland’s seven-yard touchdown run that gave Colgate a 31-16 lead with 6:06 remaining in the fourth quarter, a Raiders victory seemed etched in stone. However, Colgate failed to convert on fourth down inside Rams territory and a Fordham touchdown with 27 seconds left saw the Rams cut the deficit to 31-23. The Rams then proceeded to recover the ensuing onside kick and advance the ball quickly to inside the Raiders’ 20-yard line. The Rams were left with just seconds on the clock following an incompletion in the end zone. Fordham elected to run the same play, as quarterback Kevin Anderson lofted a pass deep into the corner of the end zone that was caught by Corey Caddle while he was essentially lying on the ground as the last seconds left the clock.

A Fordham missed extra point in the first half was now crucial, as the Rams were forced to complete a two-point conversion in order to tie the game. Colgate seemed to stop the Rams but a pass interference on sophomore Keyon Washington gave the Rams a second opportunity. On the ensuing play, a Diener pass deflection sealed a roller coaster ending for the Raiders.

Colgate saw some of its most talented players rise to the occasion on Saturday. The defense racked up eight sacks, led by senior linebacker Cameron Buttermore and junior defensive lineman Alex Campbell who each had two. Buttermore had a team-high 12 tackles, followed by junior defensive back Chris Morgan with 11 and Diener with 10. The defense held Patriot League leading rusher Chase Edmonds to just 51 yards on 18 carries. When asked about the defensive performance on Saturday, head coach Dan Hunt had nothing but praise for the stout unit.

“Fordham is a great team, so you knew until that clock had zeros on it that they were going to come back and make a play on us. I told the defense that they deserved to be on the field when this game was over because they played so well,” said Hunt.

Junior quarterback Jake Melville continues to impress, as he converted 17 of 26 passes for 241 yards and a touchdown pass to junior wide receiver John Maddaluna to open the scoring for the Raiders. Melville also rushed for 112 yards on 16 carries and two scores, while becoming only the sixth quarterback in program history to surpass the 1,000 yard season-rushing mark.

The Raiders will travel to Lafayette next weekend to take on the 1-8 Leopards. It will be the final road game for Colgate before they return home for their final two games in the hope of clinching a Patriot League title in front of their home crowd who came out in record numbers this past weekend as the largest crowd (7,879) to see a Colgate home game since 2005.

Although the Raiders have had a rough past few seasons, it will be very interesting if they can finish their season strong and on a high note. The team has been looking very good so far this season, and hopefully the Raiders can bring home the Patriot League Trophy this year. With continued leadership from players like Diener, I am confident the Raiders will be able to keep their composure for the next couple of weeks.