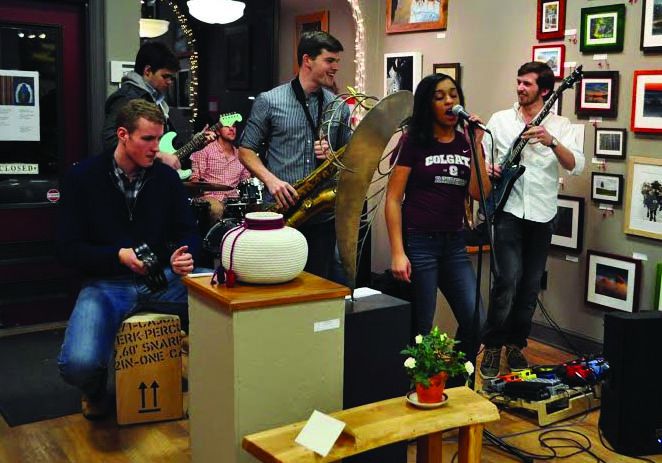 This band had a busy weekend as they played at a gallery opening and Jamnesty.

Is there anything better than the combination of talented student musicians, human rights advocacy and Royal India Grill? On Friday, November 13, members of the Colgate community gathered at 100 Broad Street (Creative Arts House) for Jamnesty, a musical event that defends rights and humanity.

Hosted by Amnesty International, Jamnesty is a concert event designed to celebrate the musicianship of Colgate students while simultaneously raising awareness of global rights issues in the form of petitions.

The event began with acts such as Mey and Iona McLean, gifted first-year twin sisters in a guitar and vocals duo. They performed a slower rendition of “I Want You Back” by the Jackson 5 among other songs, demonstrating their natural musical talent. The twins have been playing together since fourth grade, and although they do not plan on concentrating in Music, they are grateful for the opportunity to pursue their passion on campus.

“We’ve definitely had a positive experience in our involvement with Broad Street Records so far,” Iona said.

The women also performed at the Lounge event hosted at 100 Broad, but they’re glad that Jamnesty combines music and art with advocacy.

“It’s a good way to get a lot of people together to raise awareness for ongoing issues that aren’t always covered in the news, but still very important,” Mey said. “In the same way, not everything musical is always publicized, but it’s great to find events like this.”

The next musician skillfully sang and played guitar for his version of “I Miss You” by Blink 182, which stayed very true to the classic original pop-punk/rock hit. Following this was “Where is My Mind?” by The Pixies, another

During a brief intermission, students could help themselves to more of the wonderful Royal India Grill catering and choose to sign various “Urgent Action” petitions for Amnesty International’s worthy causes.

Many of the individuals in need were detained by the government and denied vital, basic human rights.

Jamnesty has been a huge success in previous years.

“This is not the first Jamnesty; there was one during my sophomore year. It didn’t happen last year because of resources, but it usually happens in the spring. I think this is a good time of the year for a bigger crowd, too,” Gagliano said.

After intermission, the event closed with No Standards, Colgate’s jazz and funk band. The lead singer, with an incredibly powerful and unique voice, performed renditions of Stevie Wonder’s “You Can Feel it All Over,” Cheryl Lynn’s “Got To Be Real,” and Bruno Mars’s “Treasure.” The combination of pounding drums, amazing guitar solos, and a saxophone produced a phenomenal final sound.

There truly is a great amount of rich, diverse musical talent here at Colgate, as evidenced by Jamnesty.