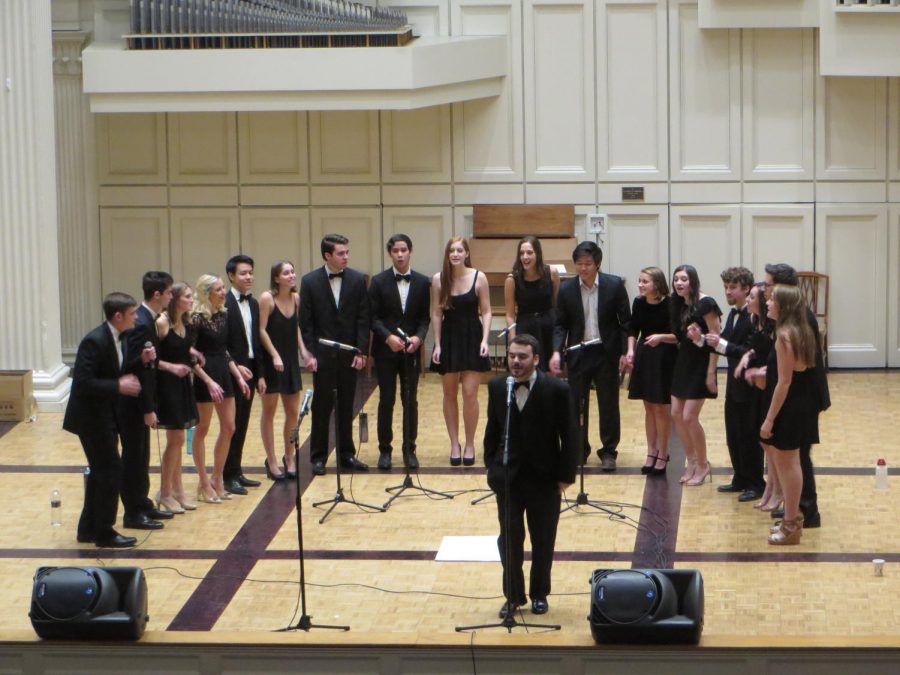 You should resolve to go to their next concert. The always talented Resos left an impression.

On Saturday, October 31, students and families gathered in the Memorial Chapel for the Dischords and Resolutions family weekend a cappella concert. The chapel was very crowded while audience members waited for the concert to begin.

The Dischords were the first of the two groups to perform. They walked onto stage in all-black ensembles. Senior Rachel Brown began with a solo for the song “Rather Be” by Clean Bandit. A somber and beautiful group performance of Imogen Heap’s “Hide and Seek” set the tone for the rest of the show. Next, sophomore Carlie McCumber sang a solo in Sara Bareilles’ “I Choose You.” Continuing the sophomore domination, sophomore soloists Tiffany Castillo and George Aldrich sang “9 Crimes” by Damien Rice. Their voices complemented each other well, and the repeated lyric “is that alright yeah” certainly left an impression.

The new members of the Dischords deviated from the serious songs of the evening with a parody of “Tonight Tonight” by Hot Chelle Rae. Members exchanged hugs and laughter after this rendition.

Sophomore Jefferson Bai performed a solo for “Wake Me Up” by Avicii, followed by sophomore Celine Andrews singing “Standing Still” by Jewel. First-year Hannah Chenok and junior Katie Lannin injected some enthusiasm and energy into “Home” by Edward Sharpe and the Magnetic Zeros. Finally, the Dischords rounded out their line-up with a solo by Castillo. Her rendition of “Take Me to Church” by Hozier was the perfect end to their performance.

“It was great to see the results of all the hard work that both groups put into this concert. Both groups killed it,” sophomore and member of the Dischords Lesther Flores said.

Next up were the Colgate Resolutions, often called the Resos. Similarly decked out in an all-black ensemble they began with a rousing rendition of “Jealous” by Nick Jonas with senior Kevin Yapaola as the soloist. This was followed by a performance of the song “Sun of a Gun” by Oh Land with senior Melanie Silverman as the soloist. Their song repertoire included, “Back to Black” by Amy Winehouse performed by sophomore soloist Emily Palermo and a group rendition of “Because” by the Beatles. Their last song before a brief halfway point intermission was “Georgia On My Mind” by Ray Charles with sophomore Benjamin Phelps as the soloist.

After, the  new members performed a skit introducing themselves to the audience that received plenty of laughs from the audience. The concert ended with performances of “Call me Al” by Paul Simon performed by sophomore Mike Vassolas and senior Anne Achenbaun. A beautiful Beyonce medley arranged by junior Ben Fetzner completed the show.

“I was blown away by the amount of talent!” sophomore Lizabeth Weingart said.