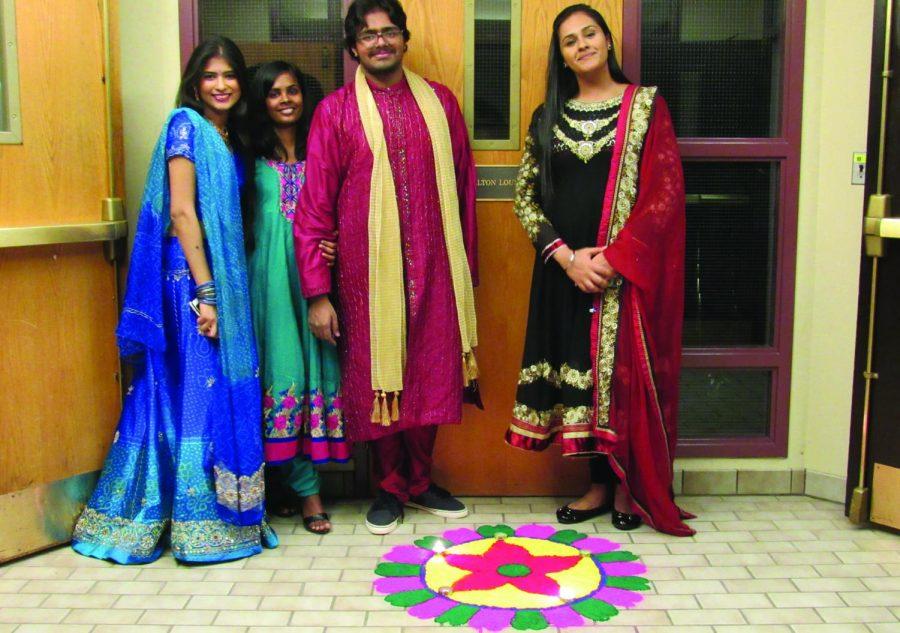 Members of the Hindu Student Association came together to celebrate Diwali at Colgate.

On Saturday, November 7, the Hindu Student Association (HSA) hosted Diwali, the festival of lights celebrated by Hindus, Jains and Sikhs, to celebrate the return of Lord Ram to Ayodhya after 14 years of exile as told in the popular Hindu epic, the Ramayana. The people of Ayodhya waited for the return of their beloved prince, and to celebrate, they lit up their houses with lights and lavishly decorated the city, beginning the tradition of the Diwali festival. Diwali represents the victory of good over evil, and the light of higher knowledge dispelling all ignorance. The preparations and rituals of Diwali typically last five days; however, the celebration rituals and meanings vary regionally, showcasing the great diversity within the religion.

Here at Colgate, the celebration began  with fireworks and then moved inside the Hall of Presidents (HOP) where there was a short presentation on the significance of Diwali. The entrance of the HOP was decorated with a rangoli, a colorful design often used to decorate the outside of houses, which was made by HSA members and first-years Priya Dhawka, Lekshmi Rajagopal and Christine Le. The night included the ritual prayer, the puja.

Junior and President of HSA, Nairuti Shah, said her favorite part of the night was the Lakshmi puja, a prayer to the Goddess of wealth and prosperity.

“It was really special to have the ceremony at the event because it felt like I was at home with my family. It was really nice for everyone, including students and professors, to be able to see the ceremony and know the importance that it holds for us Hindu students,” Shah said.

Shri Dhara Acharya from the Albany Hindu Temple came to perform a shorter version of the puja, and this year was the first time this prayer ritual was performed at Colgate.

“The best part of this Diwali was the fireworks and the prayer ceremony before, both of which reminded me of home,” Dhawka said.

Overall, the night was a success, and ended with a dinner catered by Royal India Grill. Dhawka enjoyed the night because of the great turnout of people and the joyous and infectious mood.

“Personally Diwali has always been my favorite festival because of the excitement surrounding it,” Shah said. “The atmosphere was great because everyone was interacting with each other and enjoying each other’s company.”

The HSA is very active on campus and has already hosted two brown bags this semester. Professor Brenton Sullivan of the Religion Department will be speaking at another brown bag this semester, co-hosted by the HSA and the Colgate Buddhist Community. The HSA looks forward to Holi, the festival of colors celebrated in the spring.