Seniors Offer Advice to First-Years in Series of Class Dinners 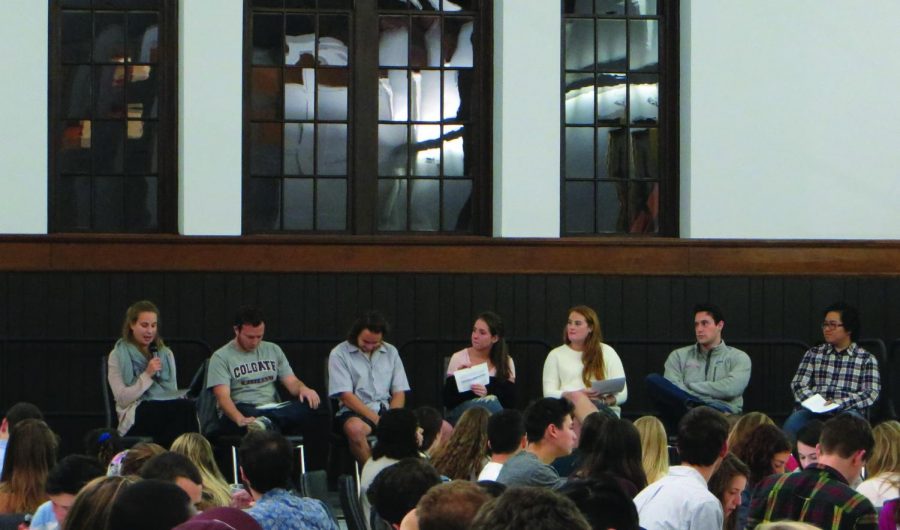 The senior class shares their experiences at the  “Class of 2019 Dinner” series, while the first-years listened with their Link groups.

Last week, first-year students were invited to a dinner series to listen to members of the senior class impart wisdom and advice on academic, social and other aspects of life at Colgate. The “Dear Class of 2019 Dinner Series,” sponsored by Colgate’s Student Government Association (SGA) in coordination with Link Staff, was held each evening from Monday, November 2 to Thursday, November 5 at the Hall of Presidents. At the dinners, first-years ate with seniors and listened to a panel of members from the Class of 2016 share personal stories of challenges and triumphs in their time spent at Colgate.

The concept of these dinners started three years ago, with the idea that upperclassmen could bond with first-years in a positive social setting. The “Spring Inclusion Dinners” allowed Broad Street representatives to talk to first-years about their experiences living down the hill. The organizers of this year’s event hoped to build off of this idea by allowing more direct conversation and insight to be shared between seniors and first-years.

“Early this fall we just thought, what if we just gave advice to the first-years, like what I wish I had known coming in as a freshman,” senior Hunter Hillman, one of the organizers and panelists at the event, said.

Hillman planned and executed the event along with SGA President senior Kegan Thompson and Vice-President senior David Kim, as well as other members of the SGA, including seniors Niall Henderson, Jessie Sullivan, Charity Whyte and Anna Roberts and sophomore Jesus Valazco-Salazar. Hillman said they intend for the event to become a tradition.

All first-years were encouraged to attend one of the four dinners, and their Links plan to reach out to the first-year class for feedback on the dinners, which will be passed on to the event organizers.

“I thought it was helpful to revisit things we heard about in orientation now that we have experienced Colgate for two months,” first-year Claire Sharpe said. “Also, I know more lingo and opportunities on campus.”

First-year Alex Goldych said she wasn’t sure what to expect of the event, but she walked into it with an open mind.

“It really helps to be able to put your life in perspective and know that other people have gone through the same things that you have, and are willing to help you through them,” she said.

Both Sharpe and Goldych said they hope the event will continue in the future.

“I know that having people say things that really resonate with me has provided me [with] a lot of comfort through this first year transition,” Goldych said.

Kim said the organizers have received positive responses from first-years and that many were happy to hear that their experiences were not isolated.

“Hopefully it is beneficial to see that the senior class, who were first-years back in 2012, had many of the same questions, experiences and thoughts as first-years today in 2015,” Thompson said. “We really wanted to bridge the gap between the two classes and create a powerful first-year/senior tradition.”

Kim said the organizing committee of the event sent out nomination forms to the entire Class of 2016 to choose the panelists for each night, hoping that the panels would offer a breadth of diverse perspectives and stories.