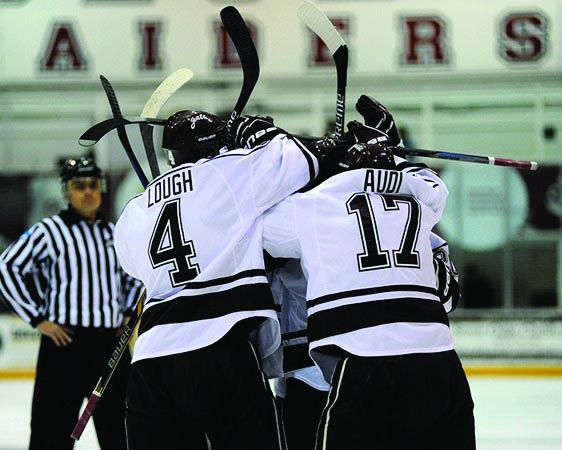 Senior defenseman Kevin Lough and junior forward Emilio Audi celebrate a goal during a home game at Starr Rink this past weekend.

The men’s hockey team started the ECAC portion of their schedule last weekend, splitting the two-game set. After a loss to the nationally-ranked Quinnipiac Bobcats, the Raiders recovered with a win the following night over the Princeton Tigers.

Skating opposite Quinnipiac Friday night, the Raiders saw the Bobcats jump out to a lead late in the first period off a goal on a redirect in front of the net. The puck made its way past junior goalie Charlie Finn, who finished the night with 31 saves in the losing effort.

Early in the second period, junior star Sam Anas extended the Quinnipiac lead to 2-0. Shortly after the Raiders responded, as sophomore forward Sebastian Weberg scored his second of the season. Fellow sophomore forward Evan Peterson shot the puck on net, and Weberg was right there to put the puck in cutting the lead in half. Just 26 seconds later, junior forward Tim Harrison continued his strong play scoring his third of the season to tie the game up. A scoreless remainder to the second period sent the teams into the third period looking for the go-ahead goal.

Quinnipiac beat Finn just over five minutes into the final frame and the Bobcats defense remained unbreakable for the remainder of the contest as the Raiders would fall 3-2 at the close of 60 minutes.

Returning to Starr Rink the next day, the Raiders faced the Princeton Tigers and reversed the result from the previous night. Colgate jumped out to an early lead, as senior forward Tyson Spink put the Raiders in the lead off an assist from senior captain Mike Borkowski. The remainder of the first period was scoreless, giving the Raiders the lead heading into the middle frame.

A Tigers goal a little over midway through the second period evened up the score. Finn, who was brilliant on the evening recording 30 saves, was beat allowing the Tigers to even up the score at one. As the period wound to a close, the Raiders would take the driver’s seat scoring as the final seconds ticked away.

The Raiders took their 2-1 lead into the third period with Finn recording 12 saves in that period, Colgate would hold on for the victory. The Raiders overall record now sits at 4-5-0, while their first ECAC victory puts them at 1-1-0 in the conference.

This coming weekend, the Raiders will prepare to face off against archrival Cornell Big Red. Colgate will look to record their first victory over the Big Red since the winter of 2014 6-1 triumph at Starr Rink. After a 7 p.m. puck drop at Lynah Rink in Ithaca on Friday November 13, the Raiders will host the Big Red at Starr Rink for the final time, with a 7 p.m. start time on Saturday November 14. A tailgate in Sanford Field House hosted by the Class Councils and Colgate Activities Board (CAB) will precede the game.