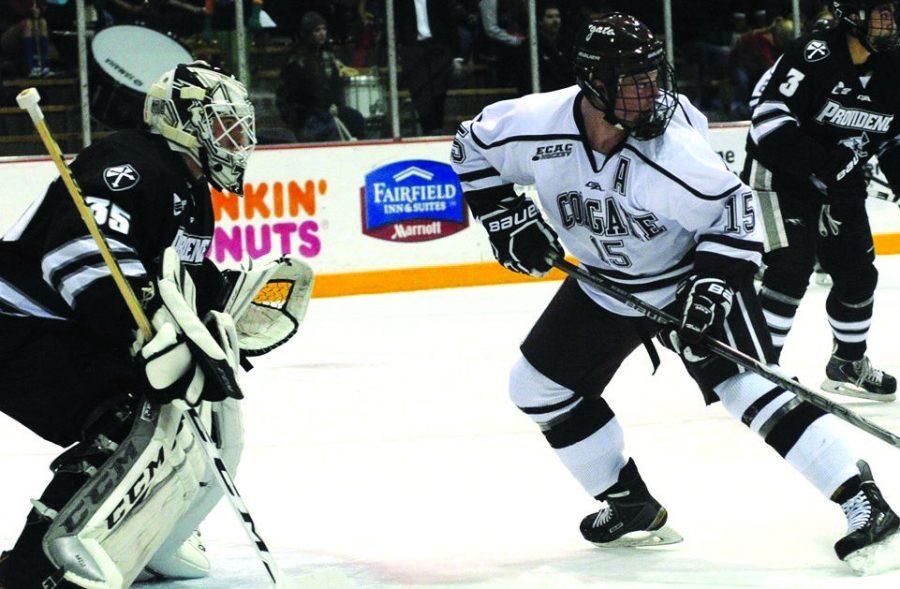 Senior forward Darcy Murphy helped lead the Raiders in their effort against the defending champs. Although he tallied a goal, Colgate lost both tilts.

This past weekend, the men’s hockey team played host to the defending national champions and nationally-ranked Providence Friars. Despite losing superstar goaltender Jon Gillies from last year’s squad, the Friars opened the season at the top of the NCAA rankings, and evidenced their power this weekend in Hamilton with two victories over the Raiders, 7-2 on Friday night and a hard-fought 4-3 battle on Saturday evening.

Friday night the Raiders came out energized and excited to face such a nationally-acclaimed team. The Friars, aware of the potential for an upset, countered the Raiders’ energy and scored just 80 seconds into the match to grab the early lead. The Friars did not take their foot off the gas, and pushed their lead to 3-0 through the first 15 minutes of the first frame.

The Friars were led by a pair of sophomores, as defender Jake Walman recorded his first collegiate hat trick and forward Brian Pinho added three assists. The two would combine for four goals and assists to terrorize the Raiders on the evening.

Early in the second period, the Raiders cut into the Friars lead, as junior forward and Calgary Flames prospect Tim Harrison netted his second of the season on a deflection from a shot by senior defender Kevin Lough. Sophomore forward Sebastian Weberg was credited with the secondary assist on the Harrison tally.

Shortly after Harrison’s goal, the Friars cushioned their lead with Walman’s second goal of the game on the power play. Heading into the third and final frame, the Raiders had their work cut out for them in mounting a comeback.

The Friars did not give the Raiders much room, as they added to their lead with two quick goals early in the third period to push their lead to 6-1. After the first goal in the final frame, junior goalie Charlie Finn, who recorded 23 saves on the night, was replaced by sophomore goalie Zac Hamilton, who would finish the contest with five saves in the final frame.

The Raiders would get on the board one final time, as sophomore defender Jake Kulevich tallied his second goal off an assist from Harrison and Weberg. Walman would add his third and final goal on the evening, an empty netter, to push the final score to 7-2.

After the Raiders’ disappointing performance on Friday, they came out the following evening looking for revenge. In a significantly more competitive contest, the Friars once again jumped out to an early lead when senior forward Nick Saracino put the Friars on the board with his first period power play tally. The Raiders responded just over four minutes later when sophomore forward Evan Peterson scored his second of the season off an assist from fellow sophomore forward Mike Panowyk. Panowyk’s assist, his sixth of the season, puts him tied for the team lead with senior forward Tyson Spink.

Providence came out strong in the second period, looking to put the Raiders away. Two goals in the first 13 minutes of the middle frame gave the Friars a 3-1 lead, but the Raiders would not go away, as a power play opportunity gave the Raiders a chance to claw their way back in. On the power play, senior forward Darcy Murphy scored from assists by senior forward Tylor Spink and junior defender Brett Corkey to pull the Raiders back in the contest.

Entering the final frame down just one, the Raiders hoped to get even with the Friars, but Saracino’s second goal of the game just four minutes in pushed the Friars lead back to two. Tylor Spink would score 50 seconds after Saracino’s tally, off an assist from junior forward Andrew Black, to pull the Raiders back within one. Providence would then buckle down for the remaining 15 minutes, not allowing the Raiders to grab an equalizer. Despite a stellar 35 saves from Finn, the Raiders would fall 4-3 to the Friars.

At 3-4-0 through their first seven non-conference games, the Raiders look ahead this weekend to their first conference contests, as they open ECAC play at home this weekend. After hosting the Quinnipiac Bobcats on Friday, Starr Rink and the Raiders play host to the Princeton Tigers the following night, both games scheduled to start at 7 p.m.