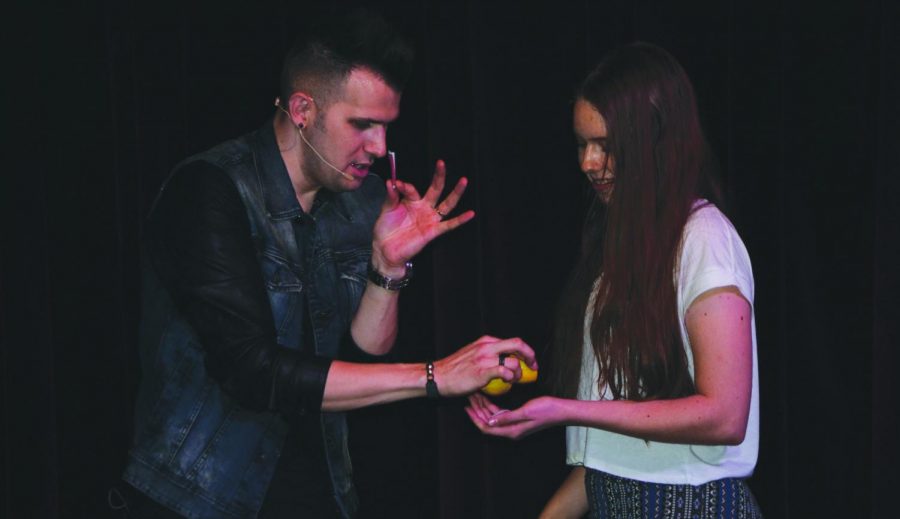 On November 4,  illusionist Joel Meyers arrived at Donovan’s Pub to entertain the Colgate student body. Meyers performed various tricks that drew both laughs and gasps from the captivated crowd. One of Meyers’ most impressive tricks began with commentary on the tables in the Pub. The uncertainty of why he was discussing the tables enthralled the audience. With the audience on their toes, Meyers quickly pointed and gasped at a table towards the side of the room. Once the audience turned, a table appeared to be floating in the center of Donovan’s Pub. Meyers was able to react to the crowd’s reactions prior to creating his illusions, which made the audience even more vulnerable.

Another fascinating trick came later when Meyers grabbed a package of Oreos and pulled the cookie apart. He proceeded to eat the Oreo stuffing in the middle. After eating the stuffing completely and then holding two dry chocolate cookies, he concluded that the stuffing was simply too delicious and he thought that he should bring it back to the cookie. Consequently, he rubbed the cookies together and voila! The stuffing re-appeared between the cookies. The crowd whispered amongst themselves about potential explanations for how such an illusion could be created.

In another act, Meyers brought out a deck of cards and a lemon. After shuffling the cards, he reached out to the crowd and picked an audience member to pull a card from his deck and keep it with them. Meyers took the same card that the audience member had picked and removed it from the deck. He turned this member’s attention to the lemon, which he began to cut open, squirting juice and seeds everywhere. At one point his face lit up with mock surprise and he pulled out the card, which was exactly the same as the one the audience member had previously picked.

“All of [Meyers’] stunts were crazy. I was beyond entertained and am still trying to figure out how he managed to create all of those illusions! This was such a great study break,” junior Katrina Stevenson said.

Overall, this event was definitely a must see. It was both entertaining and hilarious, as well as an amazing break from homework and school. The mystery behind his illusions certainly impressed Colgate students.

“He was absolutely hilarious and I feared for his life sometimes,” sophomore Alma Brizio said.