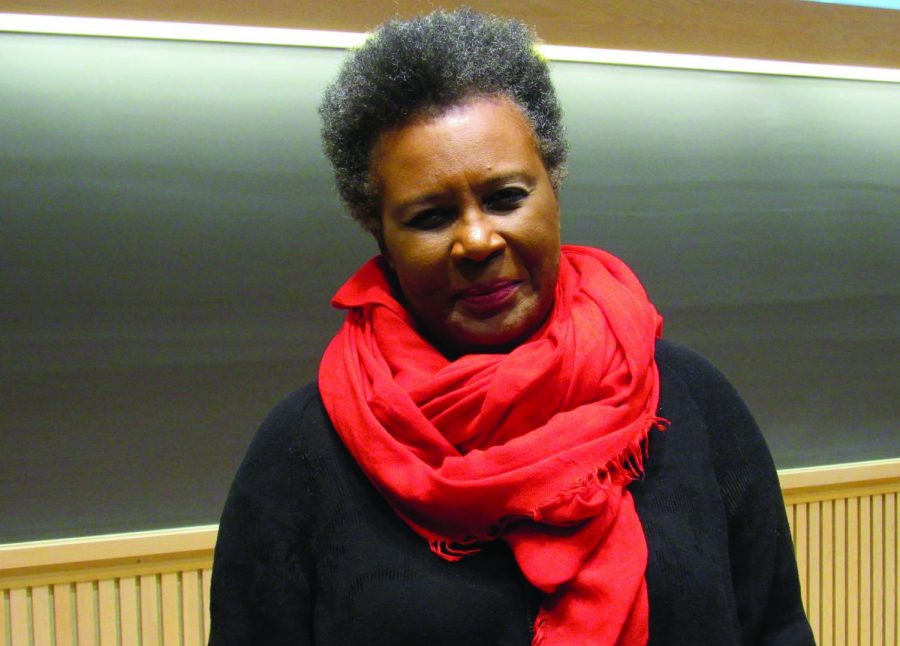 Rankine spoke of her experiences sparking conversation among students.

Last Wednesday, October 21, writer Claudia Rankine spoke at Colgate about her new collection of poetry and essays, compiled in a book titled “Citizen.” Hosted by the English department, Associate Professor of English Kezia Page and Administrative Assistant Tess Jones welcomed Rankine to Colgate with high praises for her writing.

Rankine’s book deals with the very prevalent topic of racism in modern day America. When introducing her work to the audience, she spoke of her interest in conveying her experiences and the experience of others through writing. To her, writing can be used as a tool for hurting or healing.

“Perhaps the most insidious form of segregation is that of the word,” Rankine said.

By playing two videos, she highlighted the negative impact words can have.

The second video combined footage from the police shooting of black man John Crawford in Walmart, along with clips of people sleeping on public transportation. Rankine’s voice spoke in the background stating, “We drift off in waiting areas… we understand what will happen next” and “would you, could you, should you trust.” The message was powerful: many people take their freedom for granted, but something as simple as nodding off in a place filled with strangers is not a luxury everyone has.

In the film, John Crawford was walking around Walmart, holding a BB gun that was being sold in the store. Ronald Richie called the police, claiming Crawford had been shooting. The police arrived immediately shot and killed Crawford.

“I was inspired to work on that because one thing that continues to perplex me is how Ronald Richie was never sentenced for lying, and nothing happened to him. A man is dead. There was no outcry from us about his ability to go and lie,” Rankine said.

Unfortunately, many of Rankine’s essays and poems were inspired by similar acts of racism and prejudice. Rankine highlighted the intense emotional impact horrible treatment can have on both the small scale and large scale.

Her poem entitled “Stop-and-Frisk” commented on the extreme unfairness of police patrolling black males with the line, “And you are not the guy and still you fit the description because there is only one guy who is always fitting the description.”

Rankine then turned to discussing racism on the national level through the media reaction towards black tennis player Serena Williams.

“What does a victorious or defeated black woman’s body in a historically white space look like? Serena brought to mind Zora Neale Hurston’s ‘I feel most colored when I am thrown against a sharp white background,’” Rankine said.

The criticism Williams has faced throughout the years is an unfortunate reality for people of color. Yet, for each instance of racism, there are people unwilling to speak out against it. The white tennis player Caroline Wozniacki imitated Williams’ strong frame and voluptuous features by stuffing towels down her shirt and skirt. Instead of being attacked by the media, she was defended.

“We think about race by thinking about black pain, but when we do that, we forget about white complicity,” Rankine said.

Attendees were extremely affected by Rankine’s talk, especially her tendency to focus more on how others dealt with racism instead of the actual act itself.

“I think she did a good job of portraying the black experience. She was more interested in talking about how the story is told instead of what the actual story is, which is very interesting and powerful,” sophomore Maria Cesarini said.