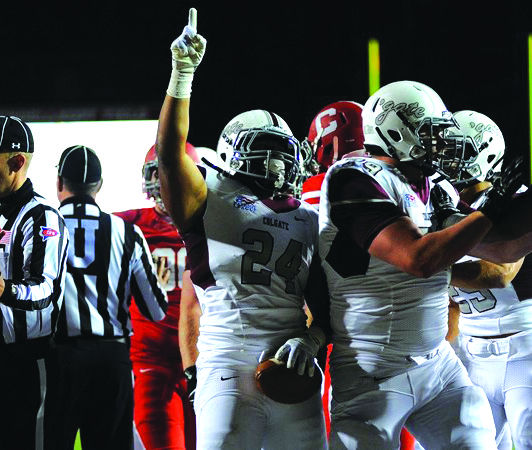 The Raiders traveled to Cornell University on Friday night and left with a convincing 28-21 victory. The Raiders had their way on offense against the Big Red as they racked up 484 total yards while collecting 26 first downs. After leading 21-7 at halftime, Colgate needed a turnover on downs by their defense with Cornell threatening inside the Colgate 10–yard line with under a minute to play to seal the win.

Junior quarterback Jake Melville completed 18 of 28 passes for 257 yards and two touchdowns. The dominating receiving duo of sophomore Alex Greenawalt and junior John Maddaluna combined for 16 receptions for 240 yards and a pair of touchdown catches. When asked about the game plan coming into the game, Maddaluna talked about a Cornell defensive scheme that he was able to exploit en route to a career night.

“We prepared all week for them to come out in man. Melville was throwing the ball nicely and the line was protecting well. We all executed well,” Maddaluna said.

Not only was the passing game effective for the Raiders, but the running game excelled despite the absence of injured sophomore running back James Holland. Junior running back John Wilkins was the leading Colgate rusher of the night with 19 carries for 106 yards and a three–yard touchdown plunge that gave the Raiders a 14-0 lead early in the second quarter. Melville added 14 carries for 97 yards and a touchdown. Senior running back Demetrius Russell also rushed 12 times for 28 yards, helping to pick up the slack after Holland had a career day in the Raiders’ previous game against Holy Cross.

The Raiders’ defense was able to stifle the Big Red attack for most of the night despite surrendering a Luke Hagy 79–yard touchdown run early in the second quarter. Cornell quarterback Robert Somborn completed five of 10 passes for only 41 yards in the first three quarters as the Raiders entered the fourth quarter with a 28-7 lead. But the third–year quarterback Somborn was 13 for 21 for 231 yards and a touchdown in the fourth quarter alone. Despite the furious rally, the Raiders were able to secure the victory, as they stopped four straight Big Red passes from the Raiders’ 10-yard line to secure a road win over their Ivy League rival.

The Raiders will continue their road trip this Saturday at 1 p.m. when they travel to Princeton University to take on another Ivy League foe in the 3-0 Princeton Tigers. Colgate will look to improve its record to 3-3 on the season and record its third consecutive victory of the season. After season-ending injuries to senior defensive stars Adam Bridgeforth and Victor Steffen early on, the Raiders have had key players step up in their absence which has been a saving grace for a team that looked on the ropes after starting 0-3. The Raiders are clearly in a winning state of mind and will look to build on some great football as of late.