Will the Real Mr. Colgate Please Stand Up? 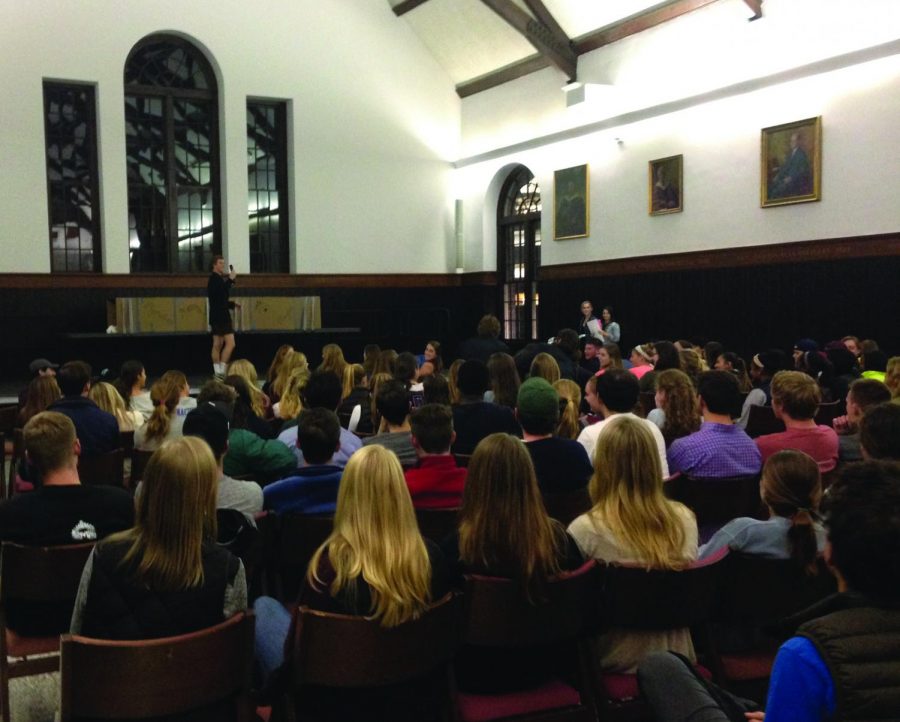 There was tight competition this year for the coveted title. Students were engaged right from the start.

On Thursday, October 21 in the Hall Of Presidents (HOP), the Colgate Panhellenic Council in association with the InterFraternity Council hosted an event called Mr. Colgate. Proceeds benefited the Community Action Partnership, a local organization that helps families throughout various communities in upstate New York. It was billed as a contest to help  find the quintessential Colgate man, based on 13 pillars, which include modesty, humor and reasonability.  The event featured Colgate men from various organizations, ranging from fraternities to club sports teams. Seniors Isabelle James, Camille Stroe, Laura West and Natalie Carpenter judged the competition.

The first place finisher Junior Daniel Copeland of Delta Upsilon performed a crowd-pleasing guitar rendition of John Meyer’s “No Such Thing.” He received a $30 gift card to Rusch’s Bar and Grill for his success.

The first performer and second place winner, junior Allen Kan of Outdoor Education, would set the tone for what would be an interesting night. He followed up a short comedic monologue with a magic trick. Kan was able to stretch a 5 foot 6 inch tall volunteer to fit end to end in a 10 foot box and then cut both the volunteer in half before putting them back together.

First-year Danny Healy, representing Colgate’s varsity Lacrosse team, serenaded a student. The participants wore only a blazer and waist-high shorts. Their routine would earn them a third place finish.

“I thought the event was a fun way to get away from the stresses of school work for a little bit. The acts were quite entertaining, especially the opening magician and Danny Healy’s well choreographed rendition of “I Want It That Way” by the Backstreet Boys. I would definitely recommend that people go to this event next year,” sophomore Lucas Cooper said.

Of the non-award winning acts, sophomore Graham Grieve of Phi Kappa Tau, likely had the most unusual talent of the night, as he took his underwear off onstage without ever removing his pants.

Despite not receiving any recognition from the judges, the act that had everyone who left the HOP talking was the closing act performed by first-year Griffin Prescott. In an act similar to Grieve’s, Prescott removed his socks without removing his shoes. He then went further by removing his shirt and having two volunteers twist his nipple as hard as they could while he sang “Hey There Delilah” by Plain White T’s. However, Prescott’s act was not over yet. In a sudden turn of events, Prescott took a hard fall to the ground. The crowd gasped. But, don’t worry. Prescott was able to utilize his newly dislocated right shoulder to his advantage. He could use his right arm to circle 360 degrees around his head to touch his right ear.

Even with the shocking feats and bodily injuries, attendees found that they enjoyed their experience.

“It was an experience… I got worried at some points but overall it was good and it was for a charity,” sophomore Laura Weiss said.

Overall, the event proved to be a good way to see men from different student groups coming together for a beneficial cause.