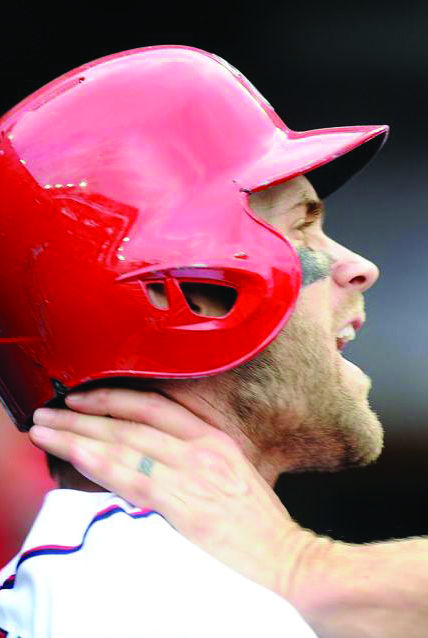 Jonathan Papelbon grabs Bryce Harper by the neck in the latest angry outbreak in the closer’s career.

In their annual preview article for the 2015 MLB season, ESPN polled 88 experts for their predictions of division winners, and 85 predicted that the Washington Nationals would win the NL East. 37 of the experts picked the Nationals to win it all. The evidence was justifiable. Washington boasted a rotation stacked with new $210 million man Max Scherzer, No. 1 draft pick Steven Strasburg and stalwart Jordan Zimmermann. Tanner Roark, who won 15 games in 2014, was pushed to make room for Scherzer. Their rotation coupled with a lineup featuring superstar Bryce Harper and several key pieces made for a dangerous team heading into the 2015 season. However, Washington could be seen as a national symbol for disappointment.

The frustration and disappointment culminated in an ugly dugout incident during last Sunday’s game against the Philadelphia Phillies. Harper in the ninth inning failed to run out an easy fly ball to the outfield. Upon walking back to the dugout, he was met with aggressive shouts by newly acquired closer Jonathan Papelbon, visibly upset with Harper’s lack of effort. Hostile banter ensued before Papelbon grabbed Harper’s neck. Teammates immediately separated the two. The situation was ugly and served as a fitting culmination of the Nationals’ season.

The incident was merely the tipping of the iceberg that was the Nationals’ season. Injuries mainly prevented the talent from truly coming together. In particular, youngster Anthony Rendon and veteran Denard Span were seen to be key pieces for the Nationals and missed out more than half the season due to injuries. Solid back-end rotation pieces Doug Fister and Gio Gonzalez regressed, and Strasburg was battered around before missing significant time with an injury. The Nationals were lagging as the frontrunner in the weak NL East for most of the season and failed to catch the New York Mets as they put together key deadline deals to take the division title.

What was more concerning was the lack of accountability of manager Matt Williams in properly disciplining Papelbon after his transgressions. Williams let Papelbon back into the game and watched his closer blow the game for the Nationals. The former Manager of the Year has been characterized for bullpen mismanagement, but this tone-deaf approach to the game is inexcusable. The front office handed Papelbon a four-game suspension, but it will be distasteful if the former Phillies closer is back in Washington next year. Finding someone to take his $11 million salary will be difficult but it is necessary in showing support for the franchise player that kept the team afloat throughout the entire season. The clubhouse situation is evidently toxic; Barry Svrugla of the Washington Post reported Williams had lost the clubhouse. The Nationals are a talented team, but merely had several small flaws that doomed their run towards the NL East crown. They need to fire Williams, cut Papelbon and start fresh. Their influx of young talent and solid rotation should be enough to put them in contention for a playoff position. A new manager may just the thing they need.