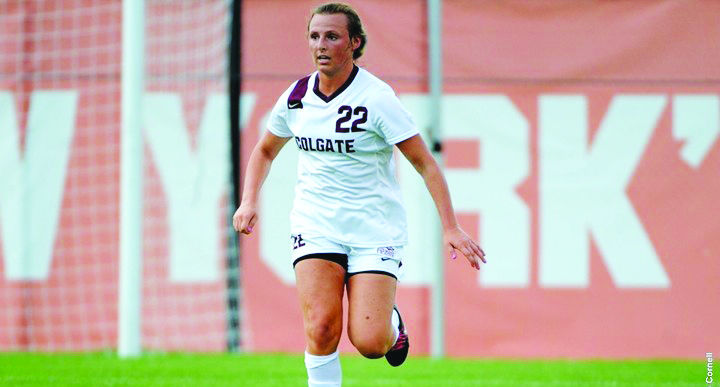 Senior captain Jenna Panepinto looked to lead the Raiders from behind in their tilt against the Loyola Greyhounds; although she scored off a crossed header, Panepinto was unable to tie up the game for the Raiders.

It was a beautiful night in West Point, N.Y. and both teams played a very fast and physical game. The rivalry between the two teams was particularly heated because of their long past; historically, the two have played each other in numerous Patriot League championships.

Senior captain Catherine Williams scored the lone goal in the 84th minute. Sophomore midfielder Eliza Doll was the catalyst behind this goal, as she crossed a loose ball that was inside the 18-yard box. As the Black Knights tried to clear the ball out of the box, Williams’ foot intercepted it and sent it off the crossbar and into the net.  The goal marked Williams third of the season, tying her for team-best.

However, the Black Knights did not back down, attempting to tie up the game through the final minutes.  The Raiders’ defense prevented any last scoring attempts made by Army.  Senior goalie Erin Cummings made a sliding save in the last two minutes to help her team secure the win and she finished the game with four saves.

“As anticipated, both teams came ready to play tonight. I am so proud of the way our whole team stayed focused in preparation for this game. It paid huge dividends out on the field,” Head Coach Kathy Brawn said.

On Saturday, October 24 at Beyer-Small ’76 Field, Colgate fell to Loyola in a thrilling game. Within the first 15 minutes of the game, Loyola scored twice and in the 44th minute they secured their third goal. However, the Raiders quickly answered back 13 seconds later when Doll sent a ball to Williams. Williams crossed it into the box and sophomore forward Emily Crinchlow sent it into the upper left corner of the goal.

After halftime, the Raiders came out goal hungry and outshot their opponents 7-3 in the second half.

“[Panepinto] was in the perfect position to score the goal and the team’s energy really picked up after,” Pullen said.

Unfortunately, Colgate was unable to tie the game up and fell 3-2 to Loyola. Coach Brawn had some insight on the game “Loyola took it to us early.  While it was encouraging to get one back before the break and a second one to pull within one, we just couldn’t find the equalizer,” Brawn said.

The loss bumped the Raiders from their fourth place spot to fifth place.  They are currently behind Loyola, Navy, Bucknell and Boston University. However, a win in their next game could move Colgate up to third or fourth place.

The next game for the women’s soccer team, which is also the last game of the regular season, is against Lafayette on October 31 at 7 p.m. on Beyer-Small ’76 Field. After this game, the Raiders will begin to prep for the Patriot League Tournament.