Women’s Field Hockey Falls to Lehigh In OT: Raiders Will Travel to Lafayette for Last Game Of Season 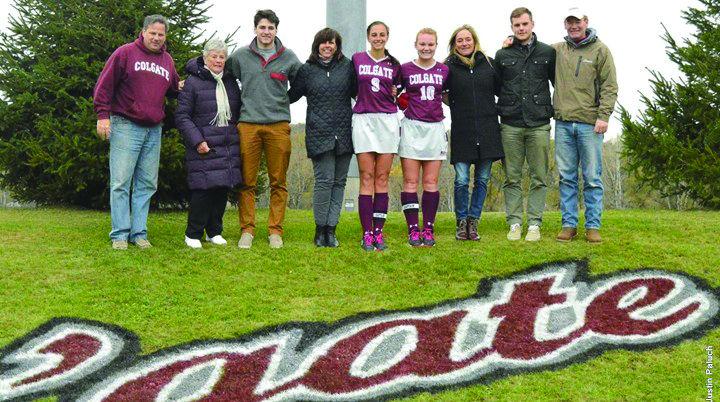 Senior Captains Lindsay McCulloch (#9) and Jessica Gardiner (#10) wore their home uniforms for the last time in the nail-biting game against Lehigh. They will officially finish their careers this coming weekend against Lafayette.

Last weekend the Colgate women’s field hockey team hosted the Lehigh University Mountain Hawks at Tyler’s Field for the team’s senior day. Although the Raiders fell to the visitors 1-2, their play continued to improve and they had one of their best performances of the season. Following this loss, the team’s record fell to 0-14, with their Patriot League record dropping to 0-5. With this victory, Lehigh’s record improved to 4-11, and their Patriot League record moved to 1-4.

Throughout the first half, the game remained scoreless as the Raiders battled their opponents. Though the team was unable to put any points on the board, the girls came out with great fervor and enthusiasm. On the offensive end, junior midfielder Kayla Robinson had two shots on goal, while junior forward Emily Brash and junior forward Whitney Jones each had one shot on goal. For the defense, sophomore goalkeeper Maria Krull had two saves. In the second half, the Raiders continued to hold the visiting team for the majority of the period. In the game’s 62nd minute, Lehigh was able to put a point on the board when junior midfielder Marissa Glatt found the back of the net on a shot taken from the middle of the circle. The goal was Glatt’s first of the season.

Following this setback, Colgate fought back tenaciously and just six minutes later, the team tied the game when Brash scored during a penalty corner after striking from the top of the circle. The play was assisted by sophomore midfielder Caroline Schaefer and senior midfielder Jessica Gardiner. At the conclusion of the second period, the contest remained tied and moved into an overtime period. The game came to an end three minutes into the third period when Lehigh scored on a penalty corner. After the insert was made by junior forward Gabby Tofig, Krull was able to save a shot taken by Glatt. However, junior midfielder Kassidy Green scored off the rebound, bringing the contest to an immediate close.

Despite the loss, this past weekend’s game was Colgate’s best performance of the season. Brash led the offensive effort by scoring her second goal in as many games, while Gardiner and Schaefer established themselves as team leaders in assists, with four and three, respectively. Krull finished the game with 11 saves against 13 on-target shots, making the game one of her most impressive performances of the season.

While last weekend’s game was notable in that the Raiders exhibited a heightened level of play, it was also significant because the team honored its two seniors, captains Lindsay McCulloch and Jessica Gardiner.

“My teammates and coaches made it an incredibly special day for Lindsay and me. I am so sad to be leaving behind such an incredible group of girls. I have made lifelong friends through field hockey here,” Gardiner said.

Furthermore, prior to the game the team held its Second Annual Chili Cook-Off to raise money for the A.J. Trustey Epilepsy Research Fund, a cause the team holds near and dear. Head Coach Cathy Foto had some insightful comments.

The Raiders will conclude their season next week when they travel to Easton, Pennsylvania to take on Patriot League adversary Lafayette. This season has been tough on the Raiders but hopefully they will be able to end it on a high note and look forward to next season to take the opportunity to learn from their mistakes. Despite their tough season, the Raiders still enjoyed a large showing for their last home game.