Identity Matters, But Not How You Think It Does: Lecture Explores the Effect of Stereotypes in the Classroom 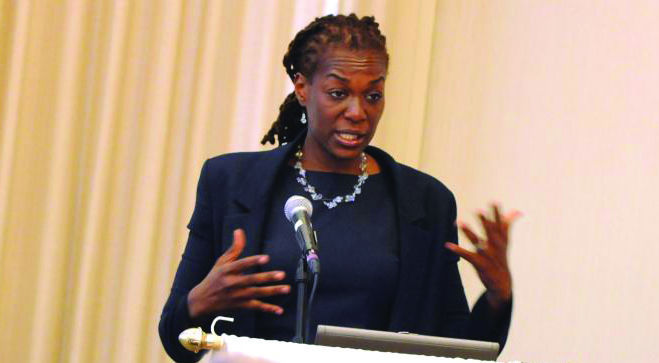 Columbia professor discusses stereotypes in the classroom at a lecture at Columbia University.

Purdie-Vaughns works in Columbia’s Psychology Department, researching the ways in which people with threatened or stigmatized identities interact with others and studying the consequences of these interactions. Her studies involve psychological threats, rather than physical threats, including stereotypes and the internal impacts that they have on different people.

Purdie-Vaughns began the lecture by giving her insight on what it is human beings really want to see in themselves.

“We all want to be good, moral, effective people that are able to control their own outcomes,” Purdie-Vaughns said.

She went on to describe an experiment that she helped conduct about a decade ago, when she was a professor at Yale University. It involved seventh graders at a nearby middle school, where African American student performance was far below that of their white counterparts. At the beginning of the school year, the students were given a list of values (including athletics, humor, music, relationships and more) and told to simply circle their top values and elaborate on why they chose them. This simple writing exercise proved to have a major effect on performance later in the year; Purdie-Vaughns and her associates reported a 25 percent reduction in the performance gap between African-American and European-American students.

The same students were given a few more versions of this brief writing exercise throughout the following year. Purdie-Vaughns stated that, as a consequence, African American students not only saw improved grades but also proved to be significantly more likely to end up going to college. According to Purdie-Vaughns, the amount of African American students enrolled in universities went up by 11 percent.

Purdie-Vaughns’ analysis of these results was that minority students feel threatened by the stereotypes they encounter on a daily basis and that these stereotypes discourage their efforts in school. However, when they are given a chance to reflect on their positive values like they did in the writing exercises, they realize their abilities and gain a significant amount of confidence.

“The problem with stereotypes is that they rattle the psychological self,” Purdie-Vaughns said. “It’s taking your sense of agency away… Society is telling you who you can be.”

Another experiment Purdie-Vaughns discussed was one in which number-oriented male and female college students were given a math exam. One group was given the standard instructions, which implied a sense of male dominance. Another group was given “no-gender-difference” instructions, in which it was made clear that gender would not affect a student’s performance. In the first group, men outperformed women three to one. On the second test, in which stereotypes were left out of the instructions, women performed twice as well as they had in the first group.

In a similar experiment that Purdie-Vaughns discussed, two groups of women were given a math exam during which MRI images were taken of their brains. In the first group, women were under no threat: they were told that the results of the test were not significant. In this case, all of the areas of the brain required for mathematical function and calculation were stimulated. In the second group, women were told that the results of this test were very important and would be an indicator as to how smart they, or women in general, were. During this test, the relevant parts of the brain were not triggered; instead, the MRIs highlighted stimulation in the areas of the brain that respond to social rejection, are sensitive to negative self-relevant information and are implicated in clinical depression.

The result of these experiments all led Purdie-Vaughns to the same conclusion: negative stereotypes have a profound impact on performance in academic settings, which in turn affects people’s life opportunities and outcomes.

“Stereotype threat kicks up [the] area of the brain associated with social evaluation, negative emotion and negative feedback to the self. This causes people to be extra sensitive when they get a problem wrong. These emotional responses interfere with learning and performance,” Purdie-Vaughns said.

This supports the idea of the importance of positive affirmation, as was given to the middle school students in the first experiment. When given opportunities such as this in school, students are reminded of their values and self-worth, as well as their abilities to control the outcome of their lives, which Purdie-Vaughns stressed as very important.

Purdie-Vaughns followed up with the middle school students from the experiment years later, when they were in college, by posing a simple question on what they anticipated their lives would be like in the near future. She asked this of both students from the experiment as well as students in similar situations who had not been involved in her research. Students who had not been given the writing exercises were primarily stressed, worried and scared about their futures. The students who had been given this affirmation, however, had a much more optimistic outlook.

One student wrote about having enough self-confidence to simply trust and try to enjoy the last few weeks of college: “This is relieving a little stress because it forced me to think about myself from an outside perspective. I sometimes forget that my life is good – I’m healthy, and have great confidence in myself. I shouldn’t be worried about anything.”

“If you’re good-looking and you look in the mirror, that’s actually affirming. If you’re a liberal and you see that Barack Obama’s doing something good, that’s affirming,” she said.

Purdie-Vaughns also discussed that even positive stereotypes can be threats. If someone views a group of people as being good at something, it may imply that they are incapable of something else. For example, she stresses that while people acknowledge the overrepresentation of Asian Americans in math and engineering departments, they may overlook the significant underrepresentation of the same group in leadership positions and in areas such as law.

Students were specifically intrigued by this part of the lecture.