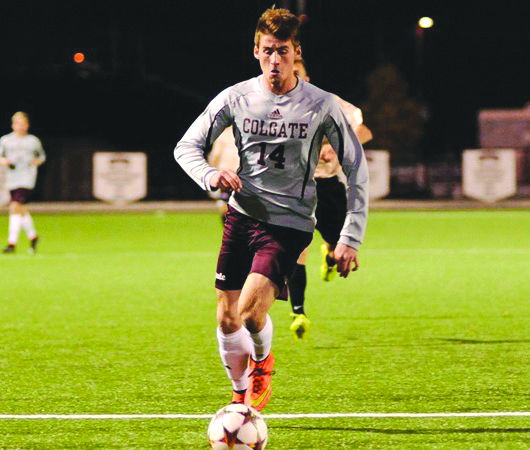 Junior Forward Ethan Kutler has established himself as the Raiders’ biggest offensive threat; he led the charge in the Raiders’ win over American.

Colgate pulled off a spectacular upset victory at home over No. 19 American Saturday afternoon. Junior striker Ethan Kutler, an offensive powerhouse, led the way with two second-half goals sparking the win. The Lansing, New York native notched his first game winner of the season in the 89th minute, after he had tied the game on a penalty kick earlier in the second half. He placed his first score of the game into the lower left corner of the net after an American back had been called for a foul inside the box. Kutler then beat an Eagles defender to a loose ball creating a nice breakaway chance with time winding down. The junior pressed inside the box, made a quick fake and then fired a shot past the keeper into the lower right section of goal.

Junior goalie Ricky Brown had a strong outing, finishing with six saves in the contest, including a tremendous stop in the first two minutes of play on a one-timed shot from American’s forward Vinny Barone. The Eagles sent in a cross from the left wing to Barone, who sent a point-blank shot on frame. Brown quickly punched away the shot, which at the time kept the game scoreless. Brown also robbed NCAA assist leader senior midfielder Liam Robley late in the game on a strong look from just outside the box.

The Raiders trailed 1-0 early to their nationally ranked opponent after the Eagles capped off a brilliant set piece in the 14th minute. American’s star midfielder Robley recorded the game’s first goal on a free kick, as he stepped up to take the set piece and launched an attempt just outside the 18-yard box. His shot was sent back by the Colgate wall but came almost directly back to him. He quickly regained control of the ball and fired another shot into the upper left-hand corner of the goal, just past the extended arms of Brown.

Colgate gave up numerous offensive looks in the first half, as the Eagles were able to register 11 shots compared to the Raiders’ 3. The Raiders, though, after making necessary adjustments in the second half, were able to rally back, scoring two goals to pull off the victory in their Patriot League opener.

With the win, Colgate improves to 4-2-1 on the year and 1-0-0 in Patriot League play. American dips to 6-3-0 and 0-1-0, respectively. For American, the loss may already be leading some to tamper expectations for a team looking to capture its first Patriot League Championship in over 10 years.

The Raiders’ difficult schedule continues with a tilt against Lehigh this Saturday. The Raiders will travel to Bethlehem, PA to hopefully bring home another decisive victory against a Patriot League opponent.

The game is slated for a 7:00 p.m. start time and can be streamed online at the Colgate athletic website.