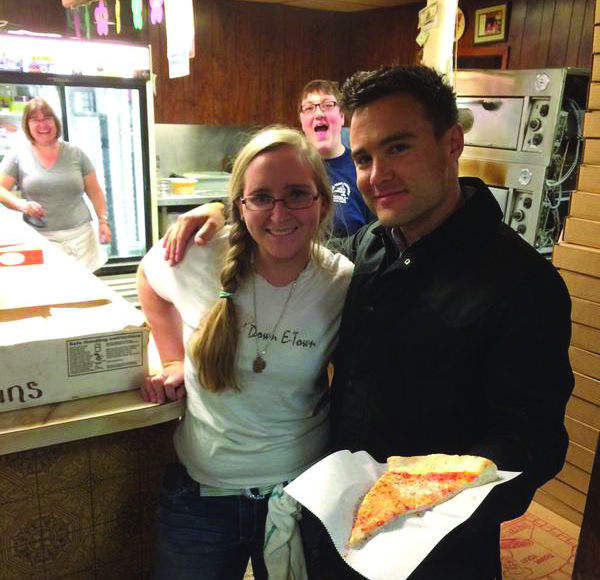 Donovan’s Pub was more than just a place to enjoy good food and company last Saturday night, October 3. Students made their way down the hill to enjoy an improv comedy show put on by Colgate’s own improv comedy group, Charred Goosebeak, and famed improv comedians Rob Belushi, Jon Barinholtz and Tim Stoltenburg.

The members of Charred Goosebeak started out the night by introducing themselves and immediately demanding from the audience a night of participation, energy and suggestions. This proved to be a crucial component over the course of the night, as the group would come up with a game or skit and then fill in the information with audience suggestions as they went along.

One of the more memorable games that the improv group did was called “interrogator.” Two members of the group became cops and two members became criminals who had committed some sort of crime. The criminals were asked to leave the building, and then the group started taking suggestions from the audience to develop a crime that they had committed. Somehow, the final product was a story of them murdering Kanye West with a case of gluten-free beer in Whole Foods. The criminals retook the stage, and the cops attempted to ask them leading questions that would help them guess what exactly happened and who they killed. The audience participated by clapping when they were getting close to the right answer to lead them in the right direction. In the end they got the scenario exactly right with both the cops and criminals providing comedic material the entire time.

The members of Charred Goosebeak then handed the stage over to their three special guests: Belushi, Barinholtz and Stoltenburg. The comedians were warmly welcomed and immediately launched into their own games and skits. The audience began to participate more and more, enthusiastically shouting out suggestions for scenarios and laughing hysterically. At one point, the three comedians left the room and the members of Charred Goosebeak asked for 15 suggestions for movie quotes, song titles or things that anyone overheard being said that day. They wrote these phrases down on pieces of paper and put them on the floor of the stage. Then the men came back and took a suggestion from the audience for a location, which was a dentist’s office. They worked the 15 random phrases into their scene, one of them being, “Are you going to the Jug tonight?” The scene somehow ended with the two men going to the Jug and bringing their creepy dentist along, whose best pick up line was, “I want to look at your bicuspids.”

Throughout the entire course of the show, the audience kept up a high level of participation and energy.

“The show was so amazing. I laughed so hard I cried,” first-year Sofia Velazquez said.

Another notable scene was an improvised debate during which the two debaters had no idea what they were talking about, “just like real politicians!” Belushi said. The members of Charred Goosebeak helped act out the specific adjective, noun and verb that the audience had suggested for Barinholtz and Stoltenburg to guess, all while trying to be funny and keep the debate feel alive. The final statement in the debate indicates how wild this scene got, “That’s why I’m here to tell you that magnificent thesauruses should fornicate.”

“I thought the improv show was hilarious. Honestly I could not stop laughing. Ten out of ten, would definitely go again,” first-year Talia Greenblatt said.

That seemed to be the general consensus of the night. As people exited the pub, you could hear people going back and forth with their friends about what their favorite scenes had been. Overall, this was a night of great comedy that was thoroughly enjoyed by all.