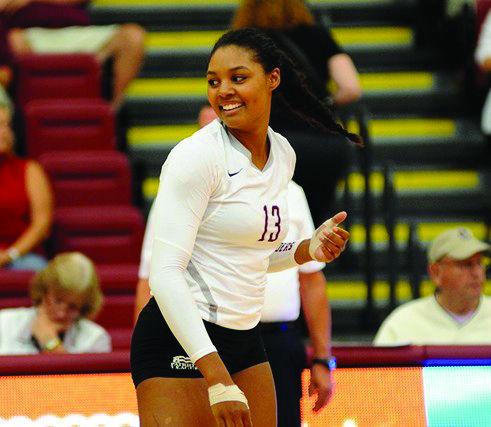 First-year Jaelah Hutchison recorded seven kills, and played a major role in the Raiders’ ability to generate some offensive opportunities.

Colgate’s women’s volleyball team defeated Patriot League competitor Navy in a close five–match set, and was defeated by Lehigh Saturday in three in action this weekend.

The Raiders started out strong against Navy, taking two 25-14 wins over the Midshipmen in the first and second sets of Friday’s match in Annapolis, Maryland.

Navy rallied in the third match and secured a 25-17 win, before forcing a fifth set with a narrow 26-24 victory over Colgate.

In the fifth and final set, the Raiders established an early 4-1 advantage over the Mids. Yet, Navy answered with a 5-1 point run to take a narrow 6-5 lead.

Then a kill from first year middle blocker Jaelah Hutchison scored the first of five straight points for the Raiders. That run sparked a 10-1 run that secured a 15-7 win and the match.

Senior setter Jackie Macy earned 25 assists, and sophomore setter Molly Smith added 23. Junior defensive specialist Madison McAndrews led on defense with 17 digs, followed by sophomore defensive specialist Elena Simpson with 11. With stats like these, the Raiders were able to hold out and collect the win over Navy.

“We once again showed that we have a team of fighters,” head coach Ryan

Colgate’s win over Navy marked Baker’s 150th win with Colgate, making him one of two coaches that have posted 150 wins in the program’s history. Before Friday’s win, Janet Little was the only coach who had posted such a record.

“It was a huge League win for us,” Coach Baker added.

The Raiders were back on the court Saturday in Bethlehem, Pennsylvania to

Colgate held a slight lead over the Mountain Hawks in the first set with the score at 22-20. Yet, a Raiders attacking error started a 5-1 run that contributed to a narrow 25-23 win for Lehigh.

The Mountain Hawks’ momentum seemed to carry over as they used a 13-1 run midway through the second set to secure a 25-17 victory.

Lehigh earned an early 6-1 advantage in the third set. Colgate rallied and brought the score within one at 7-6, but the Mountain Hawks used a 6-1 run to increase their advantage on their way to a 25-19 win for the 3-0 sweep.

With this weekend’s play, the Raiders now hold a 3-2 record in Patriot League play, and a 5-11 record overall.

Colgate is slated to host three matches at Cotterell Court this weekend. The Raiders will play American on Friday at 7 p.m., Loyola on Saturday at 4 p.m. and finish with a match against Bucknell at 6 p.m. Monday.