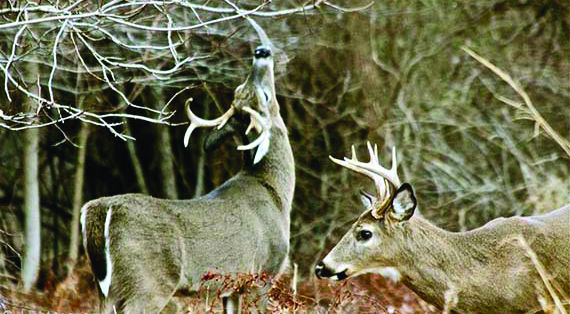 Despite some delays, Mayor Bob McVaugh hopes to start the deer culling by December.

Hamilton’s deer cull program, originally set to begin Sunday, September 20, 2015, has been delayed for administrative reasons. The Village of Hamilton cannot begin the deer cull without written permission from residents clarifying whether or not they will allow activities associated with the deer cull to take place on their property. According to Mayor of Hamilton Bob McVaugh, the process of obtaining these documents has proven more time-consuming than originally expected, so the deer cull program is now projected to begin this December.

The deer cull program, which plans to combat gross overpopulation of deer in the Village of Hamilton through controlled hunting, is a sensitive issue. Although many village residents support this solution, McVaugh realizes that not every resident is completely comfortable with it. Therefore, he acknowledges the importance of making sure that the culling is done in the safest way possible.

New York State law maintains that a bowhunter may not put up a stand or shoot within certain distances of human habitation without permission from the occupant.

“We wanted to err on the side of caution there,” McVaugh said, emphasizing that the Village does not want the deer cull program to disturb any residents.

In order to be undetected by the deer, a bowhunter must construct his or her stand well ahead of time. The bowhunter will spend several hours waiting in the stand, usually at dawn or dusk, before shooting a deer. Once a deer is shot, it may fall but not die immediately, meaning the bowhunter must remain in the stand and only approach and dress the deer once it is dead.

The bowhunters will be compensated with the meat from the deer that they shoot. However, any extra meat will be donated to food cupboards in the area.

“We know there are some people who are not particularly enthralled with the idea of a deer dying in their yard,” McVaugh said, hence the necessity for detailed written permission. McVaugh emphasized how the Village of Hamilton has taken a careful approach to this process, which is why it has taken longer than originally expected. Even if some residents do not allow the deer cull program to take place on their land, McVaugh is confident that the majority of residents support the deer cull program.

For the past two years, several Colgate professors and students have collected data and done extensive research regarding the deer overpopulation in Hamilton.

Junior Michael James first found out about the deer overpopulation research in the fall of 2013, when he took Biology 181: Evolution, Ecology, Diversity with Associate Professor of Biology Catherine Cardelus. That same semester, Cardelus and her advanced Environmental Studies class, Community-Based Study of Environmental Issues, began collecting data on the number of deer in Hamilton. The class used a scientifically valid method to find a rough estimate of the deer population in Hamilton. Cardelus and her students found there to be a significant overpopulation of deer in the town. Associate Professor of Russian and Eurasian Studies and Environmental Studies Ian Helfant, a Hamilton Deer Task Force Member, estimated that Hamilton has about 60 deer per square mile, while a normal number would be closer to 20.

In the fall of 2014, James enrolled for Cardelus’ advanced class, which again took a deer count and also examined the ecological differences between a plot of deer-free forest fenced off by the New York State Department of Environmental Conservation (DEC) and areas of forest containing high numbers of deer.

“People did recognize the deer as a problem, and we found that yes, the deer are negatively affecting the environment, but people like seeing the deer around,” James said.

However, after two years of data collection, research on various possible solutions and multiple Village discussions at Hamilton Central School, the majority of Hamilton came to the conclusion that they wanted to do a deer cull.

Overpopulation of deer has numerous negative effects on the ecosystem, human life and, ironically, the deer’s own population. First, deer population has risen to such extreme levels that it is hindering forest regeneration, explained Professor Helfant.

“Deer are browsers,” Helfant said. “They make their way through forests and sample some of this and that. They’re very wide ranging in motion and also in the types of plants they eat. That’s good because it allows them to adapt to various types of habitats, but it means the habitat can suffer.”

Other harmful results of deer overpopulation include increased risks of Lyme disease and vehicular collisions. Deer are hosts for the tick that carries Lyme disease, which Helfant says has rapidly increased in the area over the past decade. A portion of Cardelus’ research found that a significant number of village residents had suffered a vehicular collision involving a deer. Helfant supported this with anecdotal evidence.

“My wife and I went a good ten years without hitting a deer and then over the course of two weeks we both hit one. It’s just terrible … for me, it was deeply painful to see that deer thrashing around the road after I hit it,” he said.

Some village residents are concerned because the deer have made it impossible to grow gardens or hedges, but Helfant said that for him, the more compelling argument for population control is that overpopulation is awful for the deer themselves. Without their natural predators – wolves and mountain lions – an overpopulation of deer continues to grow and grow. Many of the deer starve to death in the winter due to a lack of food, which many argue is a much more painful and inhumane death than death by a predator.

During James’ semester in Cardelus’ class and this past summer, which he spent at Colgate doing more research with Cardelus, James helped investigate and evaluate many different solutions to the problem of overpopulation, including relocation, contraception and sterilization and re-introducing predators such as wolves.

“My preferred solution is you have deer culls for a few years and you get the population down to a level to where it’s environmentally okay, then you re-introduce wolves,” James said, although he recognizes that re-introducing wolves would have to be done very carefully since the idea of having hungry wolves in the area may not be welcomed by residents of the Village of Hamilton.

James said the thought of controlled hunting does bother him, but he supports the idea of a deer cull.

“Scientifically, when you put on your rational cap, we’ve really looked … at all the solutions and costs of each. It gets sticky though,” he said.

Meg Ryan, a senior Outdoor Educator, sees the value of the deer cull program, despite feeling uncomfortable with the idea of hunting animals.

“I know that there are a lot of other organisms in the area that are dependent on regular deer population. I do feel compassion towards animals, but I also have to take into account every other factor that goes into a healthy ecosystem,” Ryan said.