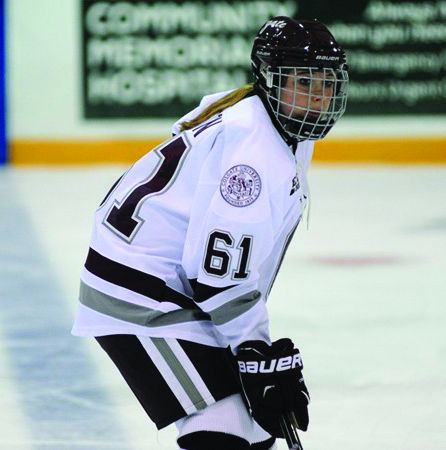 First-year forward Bailey Larson sparks many offensive opportunities for the Raiders in their 3-3 OT tie against the Huskies.

This weekend, the Raiders returned to action for their first road trip of the season, heading East to Providence Saturday evening before a Sunday afternoon tilt against the University of Connecticut. After defeating the Friars 6-2 on Saturday, the Raiders tied the Huskies Sunday, remaining undefeated this season with a record of 3-0-1.

Saturday evening in Providence, the Raiders got off to a hot start after a long hiatus from the ice. Playing in their first game since October 3, Colgate jumped out to an early lead when sophomore forward Annika Zalewski scored unassisted just seven minutes in. Shortly after, the Raiders extended their lead off goals from a pair of sophomores in defenseman Kaila Pinkney and forward Megan Sullivan.

After a strong first period, the Raiders continued their success early in the second, as Sullivan added her second of the game off assists from first-year forward Bailey Larson and sophomore forward Breanne Wilson-Bennett. Throughout the remainder of the second, the Raiders held strong and kept the Friars scoreless as senior goalie Ashlynne Rando recorded 22 saves in net throughout the game.

First-year forward Jessie Eldridge, however, came through late for the Raiders, ensuring the victory in Rhode Island. Eldridge scored her second goal of the season with just under three minutes remaining on the power play, before adding one more with 42 seconds remaining to push the Raiders lead, and the final score, to 6-2.

The following day, the Raiders took the ice again to face the University of Connecticut Huskies in Storrs, CT. After an offensive explosion the previous game, the scoreless first period came as a surprise to the Raiders, as opportunities on both ends failed to result in either team tallying the first goal of the game.

In the second period, however, the Raiders used Huskies’ mistakes to get on the board, scoring twice on the power play. Early in the period, Sullivan tallied her second goal of the weekend off assists from sophomore forward Shelby Perry and first-year defenseman Olivia Zafuto. Perry finished the day with three points, assisting on each of the Raiders’ goals in the game.

After a Huskies goal in the middle of the period evened the score, Larson scored her first collegiate goal to put the Raiders back in the lead. Larson’s first came on the power play and was assisted by both Zalewski

Early in the third, the Raiders’ potent power play was back at it, as Zalewski cashed in for the unit’s third goal of the game over seven minutes into the final frame. Zalewski received the puck from Perry and Larson, who seemed to dominate the man advantage situations against the Huskies.

Despite the Raiders’ two goal lead, the Huskies finished the game strong, scoring twice in a span of four minutes to get even with Colgate. Tied at three, the remainder of regulation was filled with defensive hockey, as neither team wanted to give the other an

opportunity to pull ahead.

In overtime, the teams played much of the same style, and despite senior defenseman Nicole Gass’ shot off the post, neither team was able to put one in the back of the net resulting in a tie.

After a busy weekend on the road, the Raiders head out of Hamilton again, visiting Merrimack for a two game set. The Raiders face the Warriors Friday, October 23 and Saturday, October 24, with both games set for puck drop at 2 p.m. Both games will be available to stream on the athletics website.