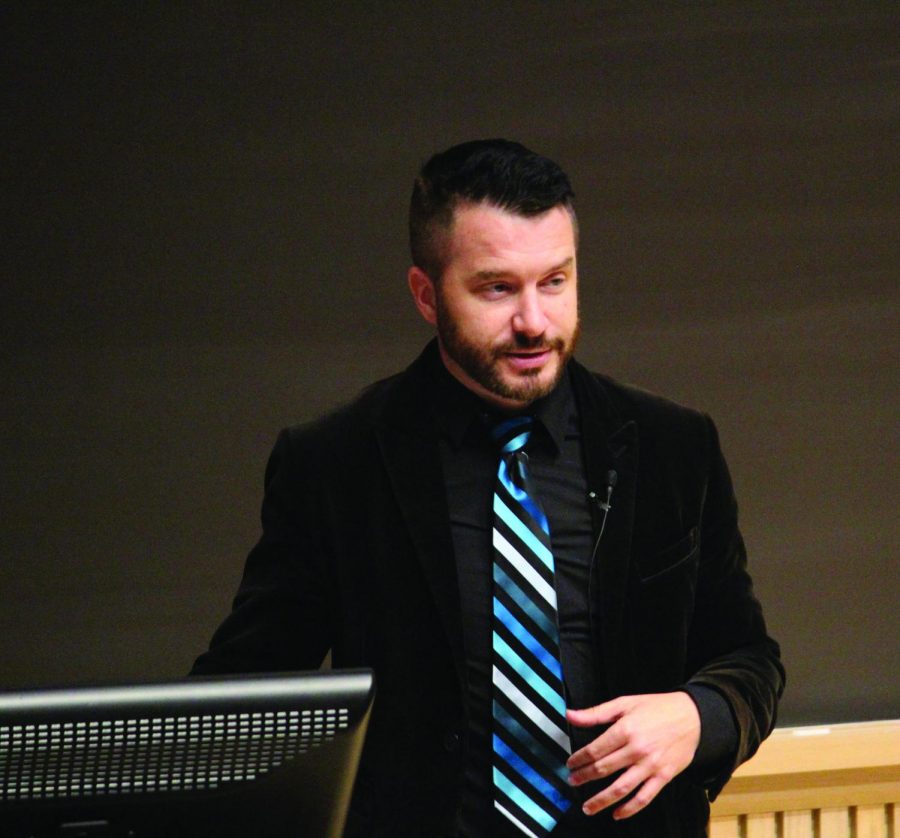 On Thursday, October 1, Colgate University’s Peace and Conflict Studies (PCON) department held the seventh annual Peter C. Schaehrer lecture, titled “Security Revolutions and Gender Justice in Contemporary Egypt and Brazil,” in Love Auditorium. This year, the PCON faculty invited Associate Professor in the Global & International Studies Program at the University of California, Santa Barbara, Paul Amar to give a lecture on his most recent book, “The Security Archipelago: Human-Security States, Sexuality Politics, and the End of Neoliberalism.”

Ten years ago, a group of Colgate alumni from the Class of 1965 came together and decided to fund a series of lectures in memory of their close friend and fellow alumnus, Peter Schaehrer, someone they described as being deeply passionate about matters of social justice and equality. Several members of this alumni group can often be found in the audience at these annual lectures. Before Assistant Professor of Peace and Conflict Studies Jacob Mundy introduced Amar, the leader of this group of alumni, Rick Stege ’65, spoke about Peter Schaehrer, referring to Schaehrer’s humbling qualities and tendency to talk about justice and equality.

“If you were moved at all by the Pope in this country, you caught a glimpse of the essence of Pete…Pete was our brother and we very much miss him,” Stege said.

Following a short introduction by Mundy, Amar took to the podium, describing the core of his research on human security before diving into his two case studies on Brazil and Egypt.

“Human security emerged as an attempt to bring the people’s needs – particularly, those of women, children and LGBTQ  individuals – in the face of new conflicts,” Amar said.

In the name of the protection of these vulnerable groups, progressives often call for the insertion of an armed force, spearheaded by the government.

According to Amar, this dilemma raises a deeper question of what role the state should hold in relation to the society it claims to represent and protect.

Amar’s first example of this kind of issue was the “Pacification Revolution,” an operation undertaken by the Brazilian government and military in 2011 to bring peace to some of Rio de Janeiro’s most impoverished areas. In the name of human security, progressives in the government deployed a new invasive police force – known as the “Pacification Police”– to the city’s slums. Despite the unthreatening name and bright-blue baseball caps they wore (to make them resemble United Nations peacekeepers), members of the Pacification Police were actually part of the infamous Brazilian Navy, the oppressive security apparatus of the government when it was a military dictatorship from 1964 to 1985.

While the Pacification Police succeeded in reducing the violence throughout Brazil’s economically disadvantaged areas, they failed to solve the key racial and economic conditions that had created these marginalized communities, ignoring the active money laundering and drug trade. Now, a year after the withdrawal of Brazil’s armed forces and the conclusion of the Pacification Revolution in 2014, corrupt police rule the slums. According to Amar, they now occupy 40 percent of Rio de Janeiro.

In the other case study presented by Amar – Egypt following its revolution in 2011 – Amar explained how the people of Egypt tended to want the military as protection against the brutal police force and the corrupt individuals that they hired. Claiming to be acting in the interest of the protection of the people, the Egyptian military seized control of the government and have not loosened their grip since. Similar to the dilemma that Brazilians face, while reliance on the military is incredibly undesirable, Egyptians are now unsure if they can survive without it. Although the doctrine of human security for Egyptians is perceived as providing security and meeting citizens’ needs, it also serves the interests of the military, as it enables them to widen their reach and increase their power.

While both militaries depicted themselves as defenders of the people, Amar said that in reality they were little more than opportunists. The Egyptian military has deepened a relationship with wealthy Saudi Arabian investors, while the Brazilian military has paved the way for an alliance between narco-trafficking and political capital.

Amar returned to speaking about Brazil, providing another example of human security at work concerning “Operation Princess,” an initiative directed by the government in 2003 to protect female and adolescent prostitutes. While government agents claimed to be treating these vulnerable groups like royalty, they were actually hunting down prostitutes to “rehabilitate” them, which was a euphemism for incarcerating them.

“With the World Cup and the 2016 Olympics, Operation Princess has returned with a vengeance,” Amar said.

Amar concluded the lecture asserting that both the examples of Egypt and Brazil represent negative aspects of human security and reliance on corrupt structures. Amar demonstrated the development of a kind of codependence, solving one armed intervention with another armed intervention and never getting to the origin of issues plaguing the most vulnerable populations in society.

Student reactions to Amar and his lecture were mixed. Junior Luke Musetti, a PCON concentrator, liked the subject but found Amar’s presentation to be unsatisfactory.

“I appreciated the premise, but I thought that the delivery was poor. I wish I could’ve read some of his literature beforehand,” Musetti said.

PCON concentrator and senior Aliya Williams offered a different take on the lecture, having read Amar’s book for one of her classes.

“I would say that the lecture on Thursday was interesting, to be able to meet Paul Amar and learn about his experiences in Brazil and Egypt. It definitely gave context for his book that clarified a lot of points we brought up in the senior seminar,” Williams said.