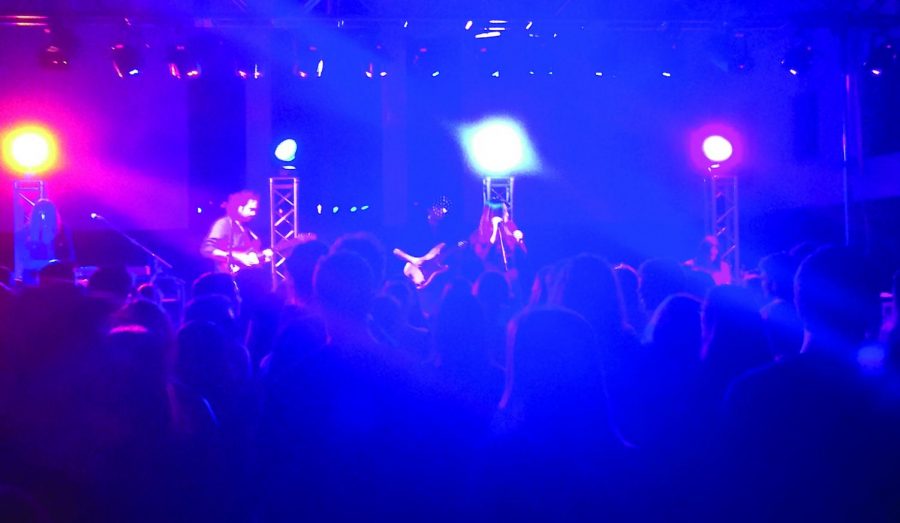 Who knew the HOP could look like this? Students hopped over to see Cults perform live.

Saturday, October 24 at the Hall of Presidents (HOP), Cults, an American Indie Band formed in New York came to play for the Colgate students. The night started with a wonderful performance by a band of Colgate students called No Standards. Free Slices and wonderful music drew a crowd of students.

“The first thing I thought when I walked into the HOP and heard the music was that Cults had already started playing. It was really cool to see that it was actually the student band! The lead singer of that was incredible,” sophomore Taylor Washing said.

No Standards performed “Got to Be Real” by Cheryl Lynn, “Valerie” by Amy Winehouse and “Game of Life” by Michelle Branch. They finished off with a great rendition of “Treasure” by Bruno Mars. A member of the band, sophomore Franklin Van Nes, described the night as a success.

“We were really happy that we could get everyone dancing before Cults came on and did the same. Overall, I think the whole night was a tremendous success and a ton of fun. I look forward to future music events by SCOPE,” Van Nes said.

After the student band finished its awesome performance, Cults came out. With the pale blue lighting, and intense anticipation, Cults didn’t disappoint. The band began with its song “Abducted,” rousing the audience with the upbeat and catchy tune. The band then moved onto songs they described as spooky.

“We heard your parents are coming next week, so before that sadness we decided to play some exciting and spooky songs. This is one of the spookiest and most romantic. So if you came with a date, kiss them or something. I don’t know what you kids do,” lead guitarist Brian Oblivion said.

The band continued the performance with “Never Heal Myself,” “Always Forever” and a spooky rendition of “TV Dream.”

The performance featured fast and slow songs moving from “We’ve Got It” to “Were Before.” Cults also sang, “You Know What I Mean,” and then moved on to their first ever live performance of “Shine a Light” and a great performance of “Bumper.”

At this point in the show, the drummer, Ted, was given a big drum solo. Ted surprised attendees with his endurance and intensity. The audience was ecstatic, and kept up a hearty “Ted, Ted, Ted…” chant for the rest of the night. The rest of the band came back on to perform “I Can Hardly Make You Mine.”

People were inspired to “Rave On.” With everyone in the crowd engaged, the band played their most well-known song, “Go Outside.” The audience was thrilled and continued dancing throughout the last two songs. The performance wound down with the band’s final song, “Come Back to Me.” In a sonorous round of applause, the band took their leave, but Ted stayed on stage for one last drum solo. The performance by Cults was rounded out beautifully, and many of the students in attendance were pleased with the band.

“The Cults concert was a great experience, and the band seemed genuinely thrilled to be performing at Colgate. Cults interacted well with the crowd which made for a fun, and high-energy environment,” sophomore Claire