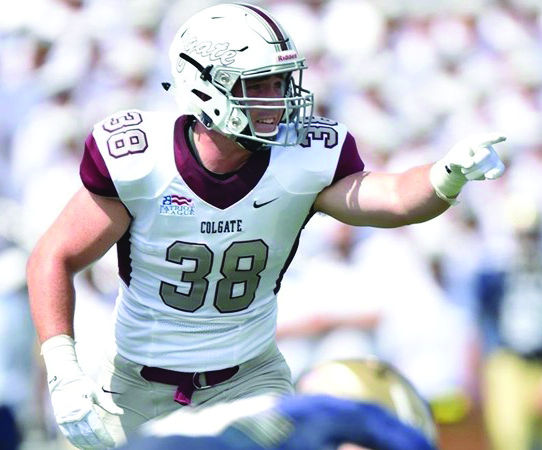 Junior linebacker Kyle Diener earned Patriot League Defensive Player of the Week recognition and will play a vital role in the Raiders’ effort against Fordham.

On October 31, a battle between first place teams will take place in Hamilton as the 7-1 Fordham Rams will take on the 3-4 Colgate Raiders. The matchup will feature the last two remaining unbeaten teams in the Patriot League. Colgate comes in following their bye while the Rams defeated Lehigh 59-42 in the Bronx this past weekend. The Raiders are seeking their first Patriot League title since 2012, while the Rams look to repeat as league champions for the first time in their program history.

Undoubtedly, Saturday’s game will be the biggest contest in Dan Hunt’s first two seasons as head coach of the Colgate Raiders. If the Raiders can pull off the upset this weekend, Colgate will be the last unbeaten team in the Patriot League and will improve its overall record to 4-4. The bye week could not have come at a better time for the Raiders as they will look to get healthy following four straight road games in which they won three of four.

Keeping that in mind, the key matchup for Raiders will be to stop the Patriot League leading rusher sophomore Chase Edmonds of Fordham. Edmonds already has surpassed the 1,000 yard mark on the season while averaging 149 yards/game on the ground. A large part of the Raiders’ plan to stop the potent Rams rushing attack will fall on the shoulders of Raiders junior linebacker Kyle Diener. Diener was named Patriot League Defensive Player of the week after he recorded 13 tackles against the Georgetown Hoyas. When asked about the goals for the bye week and the preparation for Fordham, Diener stressed the importance of preparing for the sophomore running back and the need for the Raiders to get healthy.

“During this off week, we are just trying to get healthy and are working on our technique. Fordham is a unique team with a great running back and we are trying to prepare for them and just get healthy,” Diener said.

While strong play for the Raiders defense will be the key to the Raiders’ preparation, Colgate must be able to move the ball both on the ground and through the air. The Raiders have gotten tremendous contributions over the last few weeks by the receiving tandem of sophomore Alex Greenawalt and junior John Maddaluna. Coupled with the fact that junior quarterback Jake Melville has taken care of the ball through the air, only relinquishing one interception this season, the Raiders have built an offense that is a dual threat attack. Colgate has all the makings to upset the Rams this weekend. If the Raiders can complete the upset, Colgate will clearly be in the drivers seat in a jam-packed Patriot League conference as their final three opponents have a combined record of 7-15.