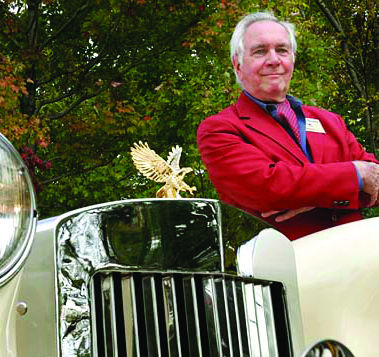 Entrepreneur Art Zimmer has come a long way from almost

failing out of Hamilton Central School. He’s been owner and operator of the Syracuse New-Times, hotels in Vermont, the Zimmer Neo-Classic Car Company and a variety of other businesses. Now at age 78, he’s written a memoir about his life, titled “Making It Count: From A to Z, the Life and Times of Art Zimmer.” The Colgate Bookstore hosted a book signing in his honor at the Colgate Bookstore on Thursday, September 24. Many locals and former classmates attended to support Zimmer’s

Throughout his life, Zimmer has met presidents Bill Clinton and George W. Bush, the prime minister of Kuwait and almost had the pleasure of fighting with George Foreman. These exciting interactions are found in his memoir. However, his life didn’t always involve meeting high profile members of society. The reason Zimmer almost failed out of Hamilton Central was because of his involvement with his family farm.

“I didn’t really grow up in Hamilton the way most people do. I was on a farm right on the edge of Hamilton. I didn’t go to school very often, I didn’t take part in any activities, I wasn’t involved in the community at all because I was just working on the farm all the time,” Zimmer said.

Hamilton Central School agreed to give him his diploma in 1956 on the condition that he never return. After high school, Zimmer enrolled in the Army and served for three years. He then moved to

Syracuse, where he took advantage of his first entrepreneurial opportunity.

“My early projects were rental houses, and I had no money, no money at all. Anyone in Syracuse that had an old piece of junk property they wanted to sell would sell it with no money down, because they desperately wanted to sell it. I was the sucker that would buy it. I would fix it up and get it rented out… After I had established a base with rental real estate, I had 300 units,” Zimmer said.

Zimmer credits his ensuing success to business acumen, hard work and a little bit of luck.

“You really don’t do anything 24/7 except work. That’s work ethic. People today don’t do that. I used to regularly work 70 to 75 hours a week. I went one stretch seven years without a day off,” Zimmer said. “I never looked for anything. I didn’t go out to buy a car company, I just saw a car with my name on it and I bought the company.”

Zimmer has since settled down from his busy work weeks, and moved back to Hamilton with his wife. The choice to move back to Hamilton was not an obvious one, as they had planned to stay in Syracuse. But they wanted to be in a small town, where everything was within walking distance.

“We found most villages were the same as ones across the country. They were empty storefronts with a Walmart sitting out on the edge of town. Why would you move there? We began to realize that Hamilton was different. There was something going on here,” Zimmer said.

Zimmer finds time to give back to the community as a Hamilton resident, something he never had the opportunity to do while living on the farm. He is on the Board of Directors for about five organizations, including the Hamilton Business Alliance, the Hamilton International Film Festival and the Eagle Scout Board Review.

With all of his years of hard work and volunteerism, Zimmer has clearly left an impact in central New York.