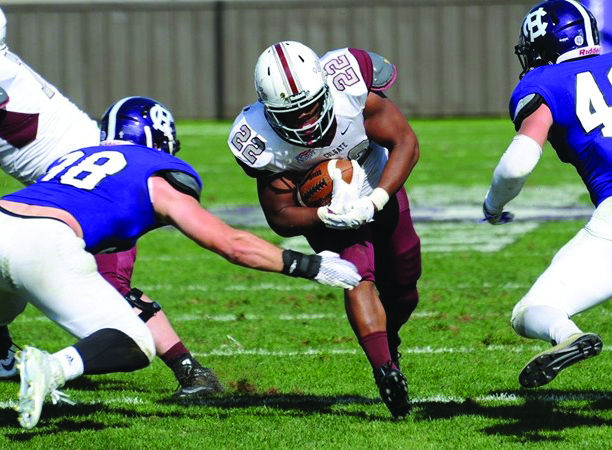 Colgate football defeated Holy Cross 31-14 on Saturday to earn their first victory of the season. Despite falling behind 14-3 in the second quarter, the Raiders were able to pile on 28 unanswered points behind a stingy defense and rewarding offensive attacking strategy.

Despite the slow start, the Raiders put together a 13-play drive right before the half. This began with senior running back Demetrius Russell’s five-yard touchdown run that cut the halftime lead to 14-10. After a scoreless third quarter, Colgate took a lead they would fail to relinquish when junior quarterback Jake Melville hit senior tight end John Quazza over the middle for a 22-yard touchdown reception.

A stingy Colgate defense forced Holy Cross to turn the ball over on downs after a kickoff return by the Crusaders gave them great field position on the Colgate 37-yard line. The Raiders then drove 69 yards on 14 plays, taking 8:32 off the clock and finishing in the end zone when senior running back John Wilkins dove across the goal line for a two–yard score. Junior defensive back Chris Morgan intercepted Crusaders quarterback Peter Pujals and returned it for a 60–yard touchdown to give the Raiders the decisive 31-14 victory.

Colgate recorded its first second half shutout of the season behind a very tough secondary. Junior defensive back Joe Figueroa returned from a rib injury that he suffered in the preseason and made his impact immediately. Figueroa recorded his first career interception that set up Colgate’s first scoring drive of the game late in the first quarter. Senior defensive back Ty McCollum controlled the Crusaders passing attack opposite Morgan while each player added seven tackles apiece. Junior linebacker Kyle Diener also added seven tackles and sophomore defensive end Pat Afriyie added two sacks to bring his season total to 5.5.

Colgate’s three-headed rushing attack was, once again, in full effect against the Crusaders. Sophomore running back James Holland led the effort, carrying the ball 24 times for a career-high 141 yards. Holland won the John Turco Memorial Trophy for his career day, honoring the most outstanding player from Holy Cross’ homecoming game. Wilkins and Russell each found the end zone for the Raiders while Melville added 54 yards on nine carries.

Behind the ground-and-pound game play for the Raiders was a banged up offensive line that put together one of their best performances of the season. Sophomore lineman Max Hartzman and senior lineman Matt McDowell made their first career starts for the Raiders in place of injured teammates Ryan Paulish and Zac Sawin. Stalwarts Jordi Dalmau, Grant Siegal and John Weber also helped solidify an offensive line that has dealt with plenty of early season adversary. Melville emphasized the advantage that establishing the line of scrimmage early gave them throughout the game, when asked about the effectiveness of the running game and the importance that it had on helping the Raiders earn their resounding victory.

The Raiders will have a quick turnaround this week as they travel to Ithaca to take on  rival Cornell Big Red on Friday night at 7 p.m. The Big Red (0-2) blew a big fourth quarter lead to the Yale Bulldogs this past weekend, as they surrendered 17 fourth quarter points to the Bulldogs. The Raiders will be hard pressed to find a reason not to get up for this game on Friday night, as they look to take down the Big Red for the second year in a row.