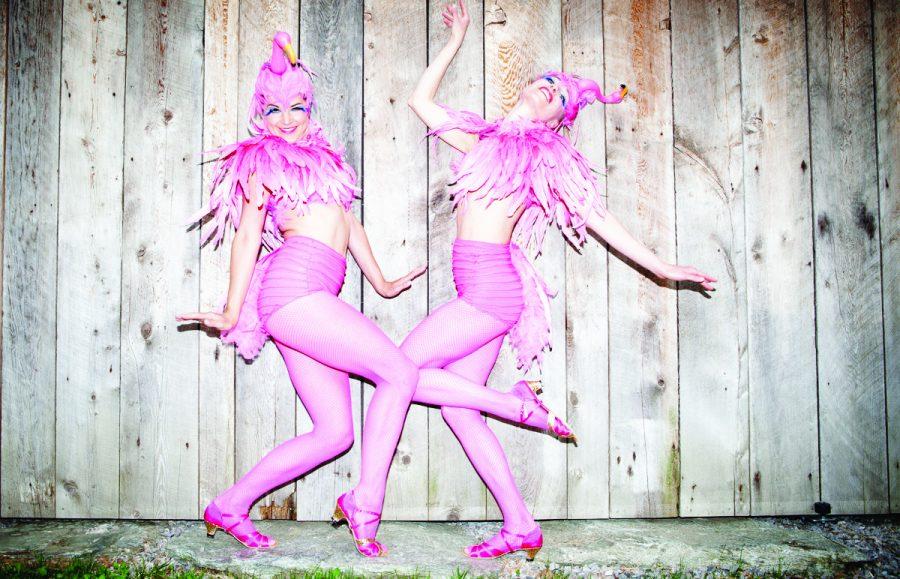 Professor of English and Contemporary Dance Tanya Calamoneri presented one of her many choreographed dance works, “Bird Suite,” to the Colgate community. On October 17 and 18, the contemporary suite was produced by Calamoneri’s New York City based dance company, SoGoNo and was hosted in the Brehmer Theater. SoGoNo draws influence from Japanese Butoh dance as well as contemporary dance-theater. “Bird Suite” reflects aspects of these forms of artistic expression; the dancers pursue hyper-controlled motions and present controversial archetypes throughout their routines.

“Bird Suite” drew spectators into the mystical world of birds. This piece consisted of four individual dances, each concentrating on representing a different fantastical recreation of bird energy. These dances explore female identity in relation to birds, as well as female sexual presence. Opening with the dance “Hatch” (2005), the audience was brought inside a bird’s nest and experienced firsthand “birds” hatching. The dancers moved with small, jolty motions. The precision given to each mannerism matched the mechanical nature of bird movements. The choreography did not attempt to bring human gracefulness into the world of birds, but rather transformed the dancers into reflecting the awkwardness associated with learning to move and fly.

Unlike conventional contemporary dance costumes, the designs of this dance were not meant to draw attention to the female body. Instead, thick feathers cloaked the chests, heads and backs of the performers. In doing so, the performers attempted to persuade the audience that they were not humans, but actually the birds they portrayed.

“The performance was not what I was expecting. However, the interpretive movements were very interesting and showed another side of dance,” first-year Maggie McDonnell said.

The company’s second selection, entitled “Flamingo Flamingo” (created in 2012, revised in 2014) juxtaposed mannerisms of flamingos in their natural habitat with the sexually driven way human dancers mimic their flamboyant appearance. Fluorescent pink costumes contrasted with the dark green lighting encasing the stage at the beginning of the selection. Both the music and lighting contributed to creating a dreamlike atmosphere. The music often shifted between relaxing sounds of nature and heavy electric guitar inspired selections. As the dance progressed, the two dancers mirrored each other with balanced, graceful movements. The low lighting matched with the downward tilt of the dancers’ faces, adding to the illusion that the humans were not merely mimicking bird movements, but instead becoming birds. As the music shifted to upbeat flamenco music accompanied by a pulsing disco ball, the dancers made extended eye contact with the audience, shattering the illusion previously created. The performers became caricatures of the birds they portrayed.

The third selection, “Ain’t No Swan Lake,” (created in 2012, revised in 2014) furthered the anthropomorphic theme presented in earlier routines. The costumes for this section were form fitting and glamorous, shifting away from the illusion that these dancers were birds. The dancers portrayed human vices, articulated through the pecking order. This routine emphasized similarities between human nature and bird behavior. “Ain’t No Swan Lake” became representative of dance theater. Props as well as dialogue were used to further the plot. The routine drew great attention to competition, vanity and obsession in both the human and bird world.

“It was a magical experience. You couldn’t keep your eyes off of them because you had no idea what would happen next,” first-year John Bennett said.

The performance ended with “Night Shore” (2015), featuring Calamoneri as well as dancer Micaela Gardner. This routine brought the spectator amongst ravenous vultures. The darkness of the costumes and backdrop, accompanied by an illuminated disco ball, gave the appearance of a moon and stars. The howling wind became a soundtrack for the birds as they devoured a carcass and took to flight.

The motions of the dancers’ arms seamlessly mimicked the swaying path of a bird fighting the merciless wind. The surreal recreation of the bird’s flight created a mysterious, dreamlike atmosphere.

Company SoGoNo will perform “Ain’t No Swan Lake” at Dixon Place in New York City on November 24 at 8:00 p.m.