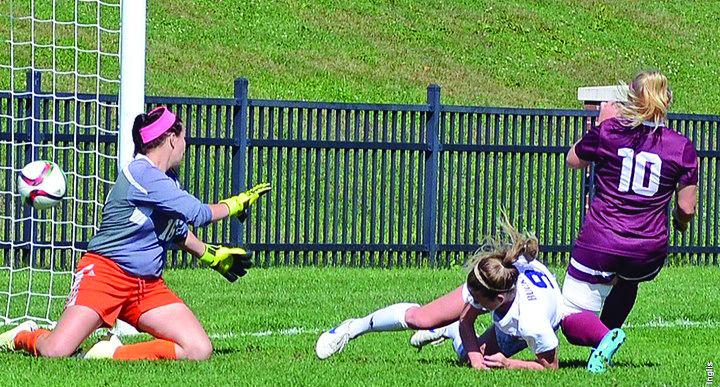 Senior forward Corey Persson led the Raiders’ offensive push all game against the Bucknell Bison and was able to put one in the back of the net for Colgate, although the Raiders fell 2-1 to the Bison.

On September 29, the women’s soccer team lost to their long–time rivals, Boston University, 2-0. The Raiders have yet to beat the Terriers since they joined the Patriot League in the Fall of 2013.

The first 47 minutes of the game was even, back-and-forth soccer between the two teams until a foul was called on junior defender Lysette Roman in the penalty area. Boston University capitalized on the penalty kick and took the 1-0 lead. This goal changed the momentum of the entire game because just over a minute later, Christina Wakefield was fed a through ball down right side of the field and centered it into the box. Sophomore teammate Jess Shreck scored in the upper right corner of the goal, clinching the 2-0 lead and scoring her first goal of the season.

Although the Raiders had many of their usual starters playing there were some formation changes. Usually, junior Emily Pullen plays center back, but with Lysette Roman returning after a concussion, Pullen was moved into the holding mid position. The players are welcoming these changes and Pullen thinks it’s beneficial to be able to get forward more because she enjoys the opportunity to see another part of the field. Also, senior captain Cat Williams, who typically plays forward, was converted to a right back.

In addition to position changes, the Raiders are dealing with a number of injured players. Sydney Parodie, Ginny Whitman and Martina Loncar are all out with concussions, which is a major loss for the team.

Although Colgate was not able to capitalize on any goals in this game they did have many scoring opportunities. Sophomore midfielder Eliza Doll played a corner kick in and Roman attempted to head it in, but the ball was deflected off the line. There was a lot of controversy over whether the ball was in the goal or not and the referees eventually called it a no goal.  Junior forward Sarah Coy also had many scoring opportunities as well.

In the final minutes of the game the emotions of players on both teams started to show. As fouls started to pile up, the tackles got more and more aggressive. Eventually, the game began to spiral out of the referees’ control.

One of the team’s goals, Roman stated, is getting the opportunity to play Boston University again and beating them.  Also, Roman also hopes that this will be the Raiders’ last loss on their home turf.

After a thorough preseason schedule to prepare them for the Patriot League conference games, the Raiders’ current Patriot League record is 1-2-1. Roman described this as not an ideal place to be, but not the worst place either.

“[I feel]confident about the next few Patriot League games, but we still have to fight for a good seed in the [Patriot League] tournament,”  Roman said.

attention it deserves. They believe in taking their games one at a time and that each game is in preparation for the next.

The next game for the Raiders is a Patriot League match. On October 10 they face Holy Cross at home on Beyer-Small ‘76 Field at 7 p.m. The Raiders are focusing on securing another win to keep improving their record.