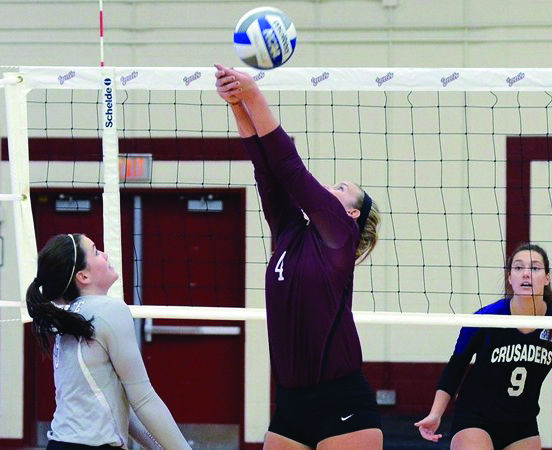 Junior Madison McAndrews comes in strong with 16 digs and six assists as she helps lead the Raiders claim victory over Holy Cross.

Colgate volleyball came back from a loss against Army West Point at home on Friday, with their second Patriot League win against Holy Cross Saturday.

Colgate held a 20-14 advantage in the first set against Army, and they pushed the score to 24-21 game point. Yet Army rallied with five consecutive points to take the first set 26-24.

Army’s momentum carried over into the second set, as the Black Knights took an early 7-2 lead. The Raiders persisted and tied the score at 18. The two teams traded points until the score read 24-all, but a Colgate attacking error and a kill from Army gave the Black Knights the 26-24 win.

With the score tied at 19, Army posted four straight points to take a 23-19 advantage. The Raiders answered with a 3-1 point run to put the score at 24-22, but a kill from the Black Knights gave Army the fourth set and the match.

In their second home match of the weekend, the Raiders rallied from a 25-20 loss during the first set against Holy Cross and secured an early 10-2 lead in the second set on their way to a 25-15 win.

Colgate earned a 21-19 lead over the Crusaders in the third set, before a kill from Harris started a 4-1 point run that secured the 25-20 victory.

The Raiders’ momentum carried over into the fourth set, as they used an early 6-1 point run, and another 8-2 spurt later in order to take a 25-14 win and the match.

“Games like Holy Cross are crucial.  They’re competition that sometimes you look down on and you cannot afford to do that, so moving forward we need to take every match and handle it like that,” Fauntleroy said.

Colgate now holds an overall record of 4-10, and a 2-1 record for Patriot League play this season. The Raiders will hopefully be able to keep up their intensity and do well in the Patriot League. This weekend, the Raiders will travel to play Navy at 6:00 p.m. Friday in Annapolis, MD, followed by a match against Lehigh in Bethlehem, PA Saturday at 4:00 p.m.