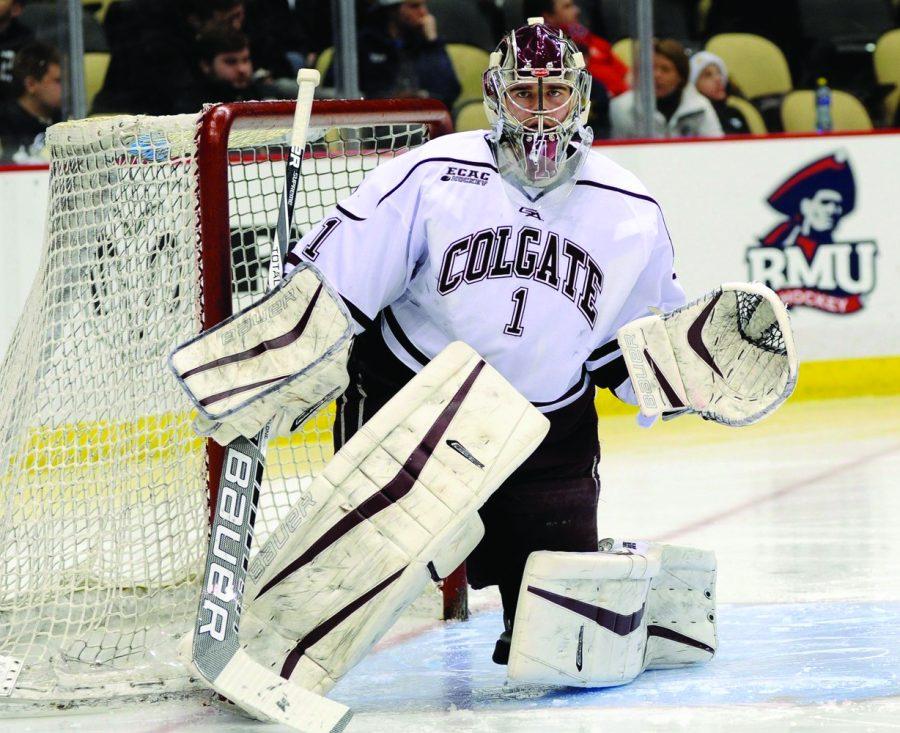 Junior goalkeeper Charlie Finn ties his record of 43 saves in the second RIT game; he helped secure the Raiders’ two wins over RIT.

On Friday, Colgate captured a victory over RIT in front of a full crowd at Starr Rink. Senior Tyson Spink led the way; scoring two goals and adding an assist en route to a 5-2 Raiders win.

With his three-point effort, Spink reached the 100-point milestone for his career, becoming the 51st player to do so in program history, and the first since Austin Smith accomplished the feat during the 2011-12 season.

The senior from Williamstown, Ont. opened the scoring with 10:17 remaining in the first period, and added an assist on twin brother Tylor’s second-period strike before capping his evening on an empty-netter with 1:15 remaining in the contest. Senior Captain Mike Borkowski and junior defender Jake Kulevich also scored for the Raiders.

Tylor Spink added an assist to his second-period goal for his first multi-point contest of the season. Senior forward Darcy Murphy finished with two helpers and first-year defensemen Willie Brooks recorded an assist.

On Saturday, senior Darcy Murphy lifted the Raiders to a 4-3 victory, notching the game-winning goal with 1:28 remaining in the third period to break a 3-3 tie at the Gene Polisseni Center in Rochester.

Murphy’s pivotal tally capped a back-and-fourth third period that saw the Tigers even the score twice, helping the Raiders complete the sweep of the home-and-road series. The score was the first for the Marysville, Ont., native.

After a scoreless and intense first period, Colgate struck twice in the second, taking a 2-1 lead into the third on the strength of tallies from juniors forward Tim Harrison and defenseman Brett Corkey.

RIT evened the score at 2 with 18:58 remaining in the third with a goal from Greg Amlong, but Borkowski recaptured the Raiders’ one-goal advantage midway through the third with his team-leading fifth score of the season. The Tigers tied the game at 3 on Myles Powell’s first goal of the season with only 4:09 remaining, setting up Murphy’s late-game heroics.

“Our line was working hard all game and we were fortunate enough to get the bounces in the third period. Hopefully we can keep it going,” said Murphy.

The line of Murphy, Borkowski and sophomore forward Mike Panowyk led the way offensively for the Raiders, finishing with seven points in the contest. The senior duo tallied a goal and assist each while Panowyk added a career-high three helpers.

“Finn gives us a chance to win every night. He makes the saves look easy, which must be frustrating for the other team,” Raiders’ Head Coach Don Vaughan said.

The Raiders host No. 3 Providence (4-0-1) this weekend for a two game series at Starr Rink. The defending national champions enter the matchup off a wild 6-4 victory over Ohio State and will certainly show up to play.

“They are two huge games for us but we’ll get back to work this week, take each game one at a time, and we’ll be ready,” said Vaughan.