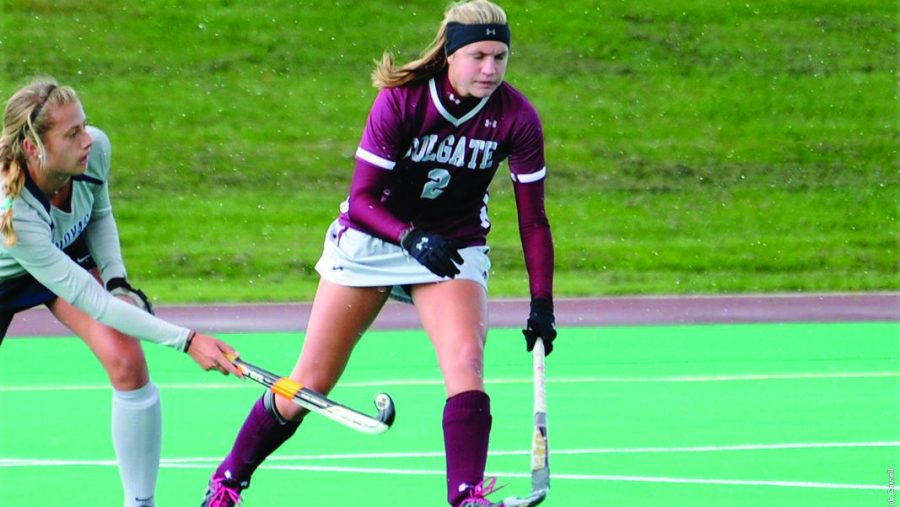 Junior forward Emily Brash attempts to lead the Raiders to victory against the Hoyas by creating some offensive opportunities; although she tallied a goal herself, the Raiders fell to Georgetown in a very close match.

Last Sunday, the Colgate Raiders continued their uphill battle by hosting the Georgetown Hoyas at Tyler’s Field in the face of inclement weather. Despite fighting hard, the Raiders were unsuccessful in their efforts and lost to the visitors 3-2. Eight days prior, the Raiders hosted Patriot League adversary American University, a contest they lost 3-1.

Though the competition versus the American University Eagles ended with a loss, it marked a turning point for the Raiders. Head Coach Cathy Foto had some positive thoughts on the game.

“The kids were able to identify in a positive way where the energy makes a difference,” Foto said.

Throughout the first half, the teams battled evenly. The first American goal came in the 17th minute during a penalty corner for the visiting team. The goal was scored on a hard shot by junior forward Natalie Konerth and was assisted by first-year forward Lucy Whalley and junior midfielder Natalie Marsh. American scored another goal with just two minutes left in the first half, also on a corner. The second goal was scored by first-year forward Rafaela Rubas, and was assisted by sophomore forward Anne Waverly Spencer and Marsh.

With the score 2-0, Colgate entered the second half eager to regain lost ground and close the gap. In the 45th minute, the Raiders put a point on the board when sophomore defender Molly Klare scored on a penalty corner. The goal was assisted by senior midfielder Jessica Gardiner and sophomore midfielder Caroline Schaefer. The Raiders proved unable to come back, despite the slight recovery, after the Eagles scored the final goal of the game in the 59th minute, again on a penalty corner. The goal, which brought the final score to 3-1, was scored by Rubas and assisted by Marsh and senior midfielder Jess Davis. Although the Raiders were not victorious, they succeeded in multiple arenas throughout the contest. Klare jumped to the top of Colgate’s scoring charts with three goals for the season, while sophomore goalkeeper Maria Krull had 13 saves, which marked the eighth time this season she has recorded double-digit saves in a game.

After having a week off, the Raiders performed in a similarly energetic manner when taking on the Georgetown Hoyas at home on Sunday. The first half of the game was fairly stagnant, with just one goal scored by junior forward Aliyah Graves-Brown in the 12th minute. The second half was more eventful, with a flurry of scoring that began in the 40th when junior forward Emily Brash brought the game to a tie. Just a minute later, the Hoyas reestablished a lead when first-year forward Helena Masiello scored. Six minutes later, sophomore forward Megan Parsons widened Georgetown’s lead with a goal assisted by Graves-Brown. The Raiders responded by scoring again in the 52nd minute when Schaefer scored on a penalty corner. She was assisted by Klare and Gardiner. However, the Raiders were unable to bounce back completely, and the contest ended with a score of 3-2, with the win going to Georgetown. Brash’s goal was her first of the season and the fifth of her career, while Krull recorded double-digit saves for the ninth time this season. When asked about the team’s progress, Schaefer had some thoughtful insight.

“Our last two games were by far our best performances. We haven’t given up even though our season hasn’t been what we hoped for,”

Following these two tough losses, the team’s record stands at 0-13, while their Patriot League record is  0-4. The Raiders host Lehigh this Saturday for Senior Day on Tyler’s Field at 1:00 p.m.