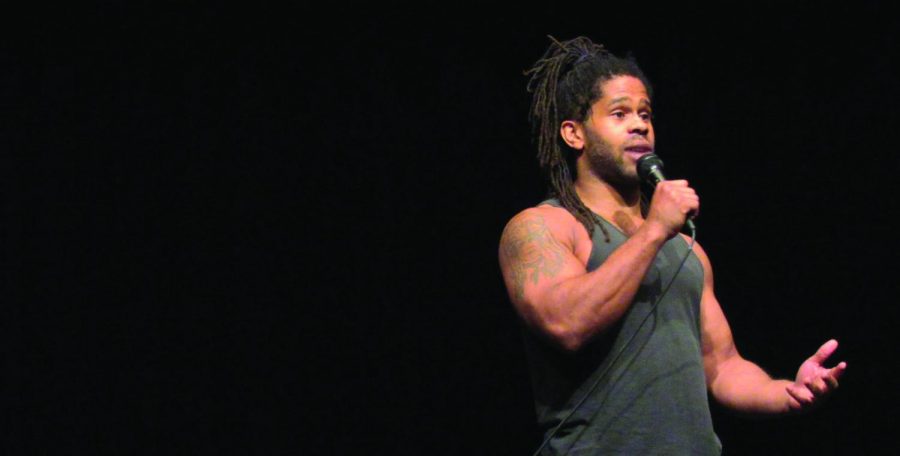 On Friday, October 2, Colgate students filed into Brehmer Theater in the Dana Arts Center to enjoy “Hip-Hop Histories: A Performance and Discussion with Duane Lee Holland,” featuring Colgate students and faculty. Presented by CORE 152, Challenges of Modernity, and co-sponsored by the English Department, Theater Program and the Department of Writing and Rhetoric, the program featured an oral history of hip-hop, in addition to fantastic and demonstrative performances by Holland and members of two of Colgate’s dance groups: Wolfpack and DDT.

Duane Lee Holland Jr. is a gymnast turned dancer who brought a lot of experience to Colgate. Before beginning to dance at age 17, Holland was a part of the Junior National Gymnastics Team. Holland has taught at many fine institutions, including MIT, Stanford University, University of Utah and UCLA, as well as at renowned dance companies such as the Pennsylvania Ballet Company, the Alvin Ailey Dance Theater and Broadway Dance Center. He has been seen on Broadway in “A Few Good Men,” “The Lion King” and “Hot Feet,” where he served as the assistant choreographer and dance captain. Currently, he is teaching hip-hop full time at the University of Iowa. Throughout the program, his extensive knowledge of hip-hop, both the actual dance moves as well as the history, came through spectacularly.

“I’m not here to educate you, or to entertain you, I’m here to edu-tain you as cultural ambassadors of hip-hop,” Mr. Holland said,  summing up exactly what he did.

Thanks to his insights on the important roles hip-hop has played in society over the years, each audience member who attended left with a new perspective.

“I thought it was an awesome collaboration between my peers at Colgate and a professional dancer, and it was cool to see them perform in a more casual setting than usual,” first-year Alina Cathcart said. “What was really cool about it was how Duane would explain a certain hip-hop dance move and the history behind it. Then it would then come to life vividly through all of the movement.”

For the nine members of Wolfpack and DDT who had the chance to work with him the whole week, it was an exciting opportunity.

“It was a new experience. I’m usually a freestyle dancer, so choreography and being in a dance group is new to me. Getting the reaction from the audience and feeding off their energy was a priceless experience,” leader of Wolfpack senior Michael Chavinda said.

Over the course of the week, Duane introduced hip-hop techniques and dance moves that some of the dancers had never seen before. After receiving his instruction, these students performed alongside Duane in demonstrations of the following styles of hip-hop moves: Popping and Locking, Breaking, Hip-Hop and House. As educational as it was for the members of DDT and Wolfpack to learn these new moves, it was equally as educational for the audience members, as they were given the opportunity to learn about hip-hop in ways they never had before, helping the members of the Colgate community broaden their horizons and gain a new perspective.