Volleyball Goes Up and Down on Weekend: Raiders Now Sit Third in Patriot League Standings 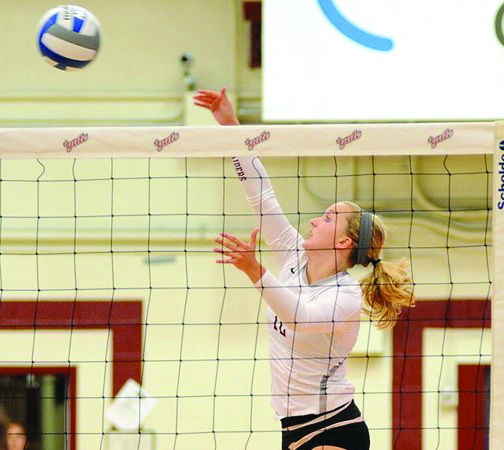 First-year Katie Stansbury lead the other first-years in the Raiders’ effort against Army with 10 digs and 4 spikes.

After claiming a 3-0 sweep against Holy Cross, followed by a 3-1 loss against Army West Point, the women’s volleyball team ranked third in the Patriot League.

The Raiders moved to 9-13 overall and to 7-4 in Patriot League play after this weekend’s matches. In their first set against Holy Cross Friday night, Colgate secured an early 7-3 lead that they pushed to a 10-5 advantage. The Raiders did not let up and increased their lead to 22-10 with three straight kills from first-year outside hitter Katie Stansbury.

Holy Cross answered with a 7-0 run to bring the score to 22-16, and then to 23-18. Stansbury countered with another kill and a service ace to take the first set 25-18. In a close second set that featured 11 ties and five lead changes, Holy Cross came back from a loss in the first set with an early 12-9 lead. The Raiders answered with three consecutive points to tie the score, but the Crusaders took the lead again, putting the score at 16-14.

Colgate countered with a 10-3 run to put the score at 24-19, with kills from Stansbury, junior outside hitter Kathleen Harris and senior right side hitter Kate Reilly. Holy Cross rallied to bring the score within one, but first-year middle blocker Jaelah Hutchison posted a kill to take the set 25-23. In the third set, with the score tied 11-all, Colgate went on a 5-0 run to take a 16-11 advantage. Holy Cross earned two points to bring the score within three, but the Raiders pushed their lead to 25-19 to take the set and the match. First-year middle blocker Amanda Smith and Stansbury led the Raiders with 11 kills apiece, followed by Hutchison with nine. The three first-years earned 31 of Colgate’s 47 kills during the match. Sophomore setter Molly Smith led with 20 assists, followed by senior setter Jackie Macy with 14.

“It wasn’t our best effort, but we found a way to win. I was very pleased with the offensive production from our freshmen,” Head Coach Ryan Baker said.

The Raiders held a slight 22-19 lead over the Black Knights in the second set, but Army West Point countered with a 5-0 run to take the lead at 23-22. Colgate answered with a 3-1 point run to take a 24-23 lead, but Army took the next three straight points for the 27-25 victory.

Junior right side and outside hitter Katie Stebbins led with 11 kills, followed by Harris with 10 and Hutchison with eight. Macy posted 21 assists followed by Smith with 17 assists and 11 digs. Harris added a team-best of 16 digs.

Colgate will take on Lehigh at Cotterell Court this Friday at 6 p.m., followed by a match on Saturday against Navy at 4 p.m.