Men’s Soccer Falls to Both Syracuse and Lehigh 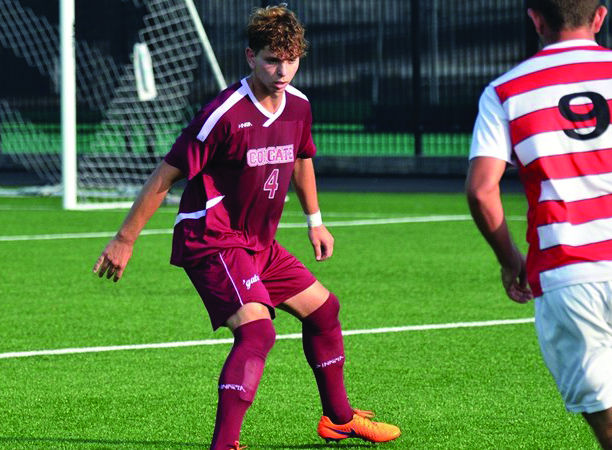 The men’s soccer team had a tough week against the Syracuse Orangemen and the Lehigh Mountain Hawks. The Raiders are now 4-4-1 on their overall season and are looking to turn it around against the Bucknell Bison this coming weekend. With Patriot League play well underway, every  game is very important.

The Raiders battled the Orangemen passionately as the rain pounded down on Beyer-Small ’76 Field last Tuesday. Although the Raiders did end up falling to Syracuse 2-0, they put up a good fight and were able to generate some close offensive attempts. One of such opportunities came in the first half after junior forward and offensive leader Ethan Kutler crossed a corner to the front of the net where the ball found first-year defenseman Aram Ouligian, who headed the ball towards the net. Unfortunately, Syracuse was tight defensively and the ball was blocked and cleared out of the Raiders’ offensive zone. Kutler generated some other offensive opportunities throughout the tilt and worked closely with sophomore forward Benji Geisler, who recorded three shots. Alas, none of the Raiders’ attempts were rewarding. Although junior keeper Ricky Brown played yet another unbelievable game, the Raiders got unlucky and fell behind to the Orangemen 2-0 as the end of the second half approached. Head coach Erik Ronning remained positive after this loss.

“All we can do is learn from the mistakes we made and get ready for a very strong Lehigh team and a Patriot League game this Saturday in Bethlehem,” Ronning said.

Unfortunately, the Raiders fell to Lehigh as well this past weekend. The game ended with a 1-0 loss for Colgate. Brown played quite the game for the Raiders, tallying a season high of seven saves and keeping Colgate in the match. The Raiders’ defense seemed to fall apart more and more as the game went on, unable to plug the holes that allowed the Mountain Hawks such threatening offensive opportunities. On the other hand, the Raiders were also not able to execute their offensive plays, similar to how they fared against Syracuse. Although Kutler remained the dominant offensive playmaker, the Raiders were unable to capitalize and put one in the back of the net.

“It was a difficult game and a tough loss. We showed some fight in the closing minutes but must bring that urgency and resolve for a full 90. We also must play with more discipline and focus on the little things that will make us

This season especially, the team seems to play more as a cohesive unit and has players with a lot of speed. Utilizing this cohesive ability will be something that the Raiders need to work on and use to their advantage as the season progresses.

Lewisburg, Pa. to battle the Bucknell Bison. The game is scheduled to start at 3 p.m. this coming Saturday. The next couple of games will likely dictate the type of season the Raiders are going to have. Since each game is so important, the Raiders will need to maintain their focus.